‘Kang’s Kitchen’ serves up a delicious dilemma : ‘New Journey to the West’ cast finds running an eatery harder than it looks

‘Kang’s Kitchen’ serves up a delicious dilemma : ‘New Journey to the West’ cast finds running an eatery harder than it looks

Recently-wrapped tvN reality show “Kang’s Kitchen” was a hot topic throughout its run, and every detail of the program - the menu, the location of the restaurant and the shooting schedule - grabbed the public’s attention.

A spin-off of the cable channel’s other hit variety show, “New Journey to the West,” “Kang’s Kitchen” was created as a prize given to the cast by the show’s producer Na Young-seok. Five of the six cast members from “Journey” - Kang Ho-dong, Lee Soo-geun, Eun Ji-won, Ahn Jae-hyun and Song Mino - took part in “Kang’s Kitchen,” but Kyuhyun from the “Journey” couldn’t join the Kitchen as he recently enlisted in the Army.

After an event on “Journey” granted the cast the chance to make a wish, “Kang’s Kitchen” became a reality, and the restaurant was set up in Jeju and was in business for five days.

Television personality Kang Ho-dong, pictured top left, became the head chef of the restaurant, while model Ahn Jae-hyun offered to be a sous chef. The other cast members, singers Eun Ji-won, Song Mino and comedian Lee Soo-geun were in charge of everything else - taking orders, making coffee, waiting tables, washing dishes, cleaning and much more. 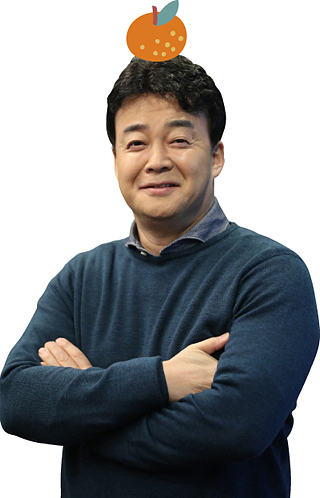 Although the two chefs have never officially run a kitchen, cooking guru and television personality Baek Jong-won, pictured right, was on hand to help them out from the very beginning. He provided the recipes for three of the restaurant’s four main dishes, including the large pork cutlet, fried rice wrapped in egg and ramen with slices of fried pork.

Baek passed on his knowledge on how to make the perfect pork cutlet and more to the team of chefs, who diligently followed his instructions throughout the run of their restaurant.

Instead of being purely focused on making audiences laugh, the program showed the harsh realities of operating a restaurant, and the difficulties those in the service industry face each day. But, that doesn’t mean there aren’t laughs. The hilarity ensues when Kang and the members face difficulties, get overloaded with work and have to scramble to meet the needs of their customers.

The cycle of unfolding the meats every night, frying the pork every day and cooking fried rice seemed to be routine, but some unexpected events always happened. For example, the wait staff went into a panic when almost every customer asked to take home their leftovers. While the requests wouldn’t be a big deal at a normal restaurant, in a dining room being taken care of by only two employees, the requests can quickly create a hectic situation.

Above left, the menu on the restaurant’s first day. At right, Kang fries a large pork cutlet. [SCREEN CAPTURE]

On one episode, the pork cutlet sauce and the cream soup ran out during rush hour and the rice was taking too long to cook, which all affected the preparation of the main dishes. Facing the difficult situation, the crew got into a shouting match.

Whenever the atmosphere of the kitchen got heated, head chef Kang would shout, “Everybody, don’t worry, be happy. We are here to be happy.” After that, the staff was able to calm down and focus on the task at hand.

Another takeaway from the show is how the cast was able to mature through collaborating with each other. Lee, the multi-talented worker, helped out the kitchen and in the dining room hall by doing the most difficult jobs - buying all of the ingredients and washing the dishes. Lee even provided babysitting service for a couple visiting the restaurant to allow the mother to enjoy her meal.

On the fourth day, Song had to return to Seoul and producer took his place, a surprise to many viewers. In the past, as a producer, Na always shied away from the cameras, staying behind the scenes and watching them suffer through their difficult situations. But Na found himself in a bind when he couldn’t do any other job except stand in front of the sink and wash dishes over and over. The members laughed at Na while he struggled doing the dishes.

Shin Hyo-jung, the show’s other producer, said at a press preview held before its premiere, “This kitchen isn’t operated only to arouse laughter, but it is funny.”

The show wrapped up with an average of 8.3 percent viewership rating. Every episode had more viewers than the previous one. Although they made almost no profit - the restaurant’s total sales were 3,520,700 won ($3,303), but the total costs were 3,419,200 won, making the gross profit 101,500 won - they were surely successful in capturing the hearts of both audiences at home and their customers.