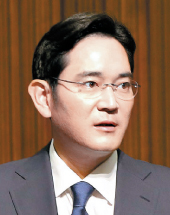 Samsung Electronics Vice Chairman Lee Jae-yong, who has remained in police custody since February on corruption charges, voluntarily resigned from the board of directors for the Boao Forum for Asia, a Chinese government-backed annual nonprofit international event, according to sources on Wednesday.

“Vice Chairman Lee’s term is slated to last until the end of this year and its extension will be confirmed at the board of directors’ meeting in April,” said a Samsung executive.

“Given he is in police custody, it will be impossible for him to attend the meeting.”

Who among the Korean chaebol community will take over from the Samsung heir apparent is not yet clear.

The de facto commander-in-chief of Samsung is one of 19 directors on the board for the conference, which is scheduled to start on April 8 this year under “An Open and Innovative Asia for a World of Greater Prosperity” in Boao, Hainan Province, China.

Lee took over the post in 2013 from SK Chairman Chey Tae-won, who was then behind bars, and has used the annual event to promote Samsung’s bold research and development plans with a focus on China.

The forum was launched in 2002 to function as a platform for dialogue among leaders of national governments, industrial and business circles and academic circles in Asia.

The idea for the forum was proposed in 1998 by former top government officials of the Philippines, Australia and Japan.

This is not the first time that Lee has been forced to withdraw from a major post in the international business community. Last April, two months after he was indicted, he lost a board seat at Exor SpA, an Italian holding company that controls Fiat Chrysler Automobiles. Lee was appointed to the Exor board in 2012 and his tenure was renewed for another three years in 2015.

The Vice Chairman of the world’s No. 1 smartphone and memory chip producer also lost a chance to mingle and make deals with other billionaires and tech moguls such as Elon Musk of Tesla Motors and Mark Zuckerberg of Facebook in the exclusive Sun Valley conference in Idaho last July.

Lee was sentenced to five years in prison in an initial ruling in August and prosecutors sought a 12-year jail sentence in an appeals trial last month. The Seoul High Court is scheduled to issue a ruling on Feb. 5.