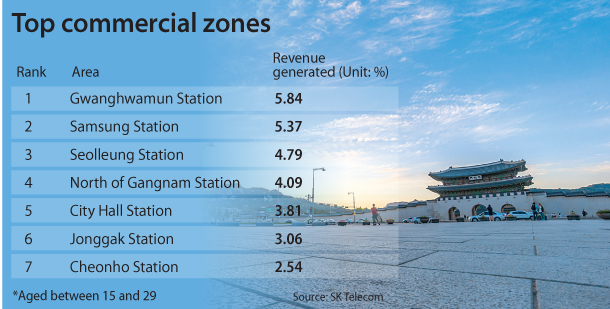 More money was spent in Gwanghwamun, central Seoul, than any other commercial area in Korea last year, according to Geovision, a big data analysis service of SK Telecom.

Geovision analyzes the business environment in major commercial areas based on a 2012 map that highlights the country’s top 1,000 commercial districts. Although the boundaries of each commercial area are not defined, each one has at least 90 stores. Most of the areas are named after a well-known landmark or a nearby subway station.

The total for each commercial zone is calculated by combining the sales revenue for restaurants, convenience stores, independent shops, medical clinics and offices such as accounting firms.

However, revenue from large department stores and hypermarkets are excluded from the total as “they often distort data,” according to a spokesperson from SK Telecom. Based on Geovision’s analysis, shops in Gwanghwamun brought in 5.84 trillion won ($5.49 billion) in annual revenue last year, topping the list as the hottest area for business operators. In 2013, the same area ranked 20th, with only 741.1 billion won in revenue.

“Large events, including candlelight rallies, kept consumers on the northern side of the Han River,” SK Telecom said in a statement.

Still, the commercial area near Samseong Station, southern Seoul, ranked second on the list. Young office workers are major customers in the area. Although sales at the renowned exhibition center and department store COEX are not counted toward the total, customers and exhibitiongoers often visit areas nearby for shopping and entertainment.