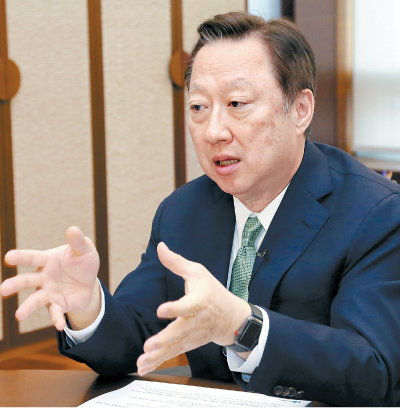 Park Yong-maan, Chairman of the Korea Chamber of Commerce and Industry

“Korea’s only competitive edge over other nations is its speed [in developing and catching up with new industry trends]. But it is the country’s legislature that is undermining that edge now. It is utterly regrettable,” said the chairman of the Korea Chamber of Commerce and Industry, Park Yong-maan, in an interview with reporters in late December last year.

As the head of the organization that represents 170,000 businesspeople in Asia’s fourth largest economy, Park, who is also the chairman of Doosan Infracore, used harsh terms to lambast the direction the government has taken in terms of business regulations. He criticized the level of regulations as “worse than socialist China” and slammed the National Assembly for “standing idly by and letting this happen.”

The 63-year-old chairman said his group had demanded the legislature amend relevant laws to better reflect the business environment and raise industry competitiveness, but the Assembly “has taken the opposite approach” to its demand, Park claimed.
Below are edited excerpts from the Korea JoongAng Daily’s interview with Park.

Q. What do you expect of the Moon Jae-in government’s economic policy for 2018?

A. Businesspeople dread uncertainty. I think that uncertainty has faded away [in recent months] because the Moon government’s policies, such as fair competition, income-led growth, innovative growth and people-centered growth have taken firm direction. But the government will face hurdles in the process of implementation of these policies. There have been support and opposition to these measures. But the level of opposition to those policies from those who have business interests is much higher [than opposition from the general public]. The government will have difficulty managing its policies as opposition and conflict are likely to continue.

The business community will see large-scale changes this year, such as the increased minimum wage and reduced working hours.

We have to see this matter from the perspective of principle and reality. We should have a principle for the minimum wage policy by giving benefits to the group of people with lowest income. For small to medium sized firms, their operating profits hovered around 4 percent. But the minimum wage increased 16.4 percent this year [to 7,530 won, or $7.07], which will make things harder for small to medium sized companies. It will lead them to reduce working hours [to cut back labor costs]. And that will lead to reduced income for workers. I propose to solve this matter through dialogue while protecting principle behind such business policy. For instance, we could apply the minimum wage requirement flexibly depending on the size of firms.

It sounds like this matter should be dealt with by the legislature.

I visited the National Assembly five times last year, but it seems like our plea was not heard. Frankly, I feel like I have to cry out loud to deliver our plea. I assume my job [as head of the commerce chamber] is to urge lawmakers to listen to business community’s pleas and take on action accordingly.

What do you think the most important business regulations to lift are?

There has been much talk about discarding unnecessary regulations, but not much change has been done. Will it be the right business environment when we can’t do particular business here due to regulation when the same business is allowed, even in China? Is it understandable that we have more regulatory barriers here in Korea than in socialist China? The time has really come upon us to get rid of outdated regulations. A study shows that more than half of innovative enterprises that have succeeded globally could not have been launched or managed in the Korean market [because of regulations]. The Massachusetts Institute of Technology selected the top 50 smartest companies [last year]. Of the 50 selected, seven are Chinese companies while 31 are American ones. But not a single one was from Korea. I can’t help but ask what we can do to excel globally if we lag behind in the speed [of launching new business models]. But bureaucrats are reluctant to update regulations and the National Assembly only debates the pros and cons of regulation change but takes no action afterward.

There has been suspicion that the Moon administration is disregarding the business community when setting its business policy.

What regrets do you have as the chairman of the Commerce and Industry Chamber?

To be honest, I feel helpless watching the endless cycle of conflict and strife and delays in realizing change. I visited the Assembly so many times pleading for law revision, but it is going in the opposition direction. Nearly 1,000 business-related laws have been submitted to the 20th National Assembly, and of the total, 700 are regulatory measures. I sometime wonder if my pleading efforts have any impact on lawmakers.

How do you reconcile conflicts of interest between smaller firms and conglomerates as the chamber head?

Ninety-seven percent of the members of the chamber are small- to medium-sized companies. For that reason, much of my job entails listening to their demands. Major companies actually don’t need a communication channel such as the industry chamber because of its powerful influence. And of course, I do not serve my role only on behalf of small- to medium-sized firms.

What do you think about the government’s nuclear energy-free policy?

I will not answer that question, as my answer could be misunderstood, regardless of what I intend to convey.