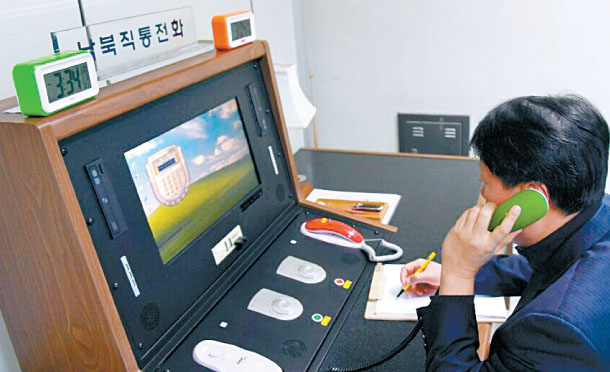 A South Korean liaison officer in the border village of Panmunjom receives a call from his North Korean counterpart Wednesday, the first in 23 months, after Pyongyang agreed to discuss sending a delegation to the Winter Olympics. [MINISTRY OF UNIFICATION]

Pyongyang accepted Seoul’s offer of dialogue and said it would reopen its hotline in the border village of Panmunjom to discuss “practical matters” about its participation in the upcoming PyeongChang Winter Olympics.

On state-run broadcaster Korean Central Television Wednesday, Ri Son-gwon, chairman of the Committee for the Peaceful Reunification of the Country of the DPRK, which handles inter-Korean relations, said he was “authorized” by North Korean leader Kim Jong-un to make a statement on Pyongyang's acceptance of the dialogue offer and reopening of the Panmunjom hotline. The DPRK is the acronym for North Korea’s official name, the Democratic People’s Republic of Korea.

The Unification Ministry, South Korea’s equivalent to Ri’s committee, later said in a statement the same day that a North Korean liaison officer called the South through the Panmunjom hotline at 3:30 p.m., South Korean time, exactly when Ri said the channel would be restored. It was the first time in 23 months that the two sides conversed through the hotline.

A South Korean liaison officer picked up the phone. The two exchanged their names and then spoke for about 20 minutes, according to the ministry, mainly about telecommunication systems. Further details of the conversation were not disclosed.

North Korea severed all channels of dialogue with the South in February 2016 after the administration of President Park Geun-hye shut down the jointly-run Kaesong Industrial Complex following Pyongyang’s fourth nuclear test in January and subsequent long-range rocket launch.

The South has been calling North Korea daily via the Panmunjom channel at 9 a.m. and 4 p.m.

In Ri’s televised message, Kim was quoted as saying he “welcomed” South Korean President Moon Jae-in’s positive response to his New Year’s address, in which he expressed support for sending a North Korean delegation to the Winter Games in the South, adding that both sides “could urgently meet” to discuss the move.

“He instructed the United Front Department of the Central Committee of the Workers’ Party of Korea and the Committee for the Peaceful Reunification of the Country, the National Sports Guidance Committee and relevant units of the DPRK government to promptly take substantial measures with the south Korean authorities out of [a] sincere stand and honest attitude,” Ri said, according to an English version of Ri’s statement released by the news agency’s website.

North Korea’s sending of a delegation and inter-Korean talks leading up to that, Ri continued, “are the first meaningful and good step for improved north-south relations under the present situation.”

“Whether the issue of improved north-south relations that has been put high on the agenda is settled” to both countries’ expectations, the leader was quoted by Ri as saying, “entirely depends on how the north and south authorities handle this issue in a responsible manner.”

Ri vowed to “keep close communication” with the South Korean government in the earnest hope that the Games “successfully open.”

In Wednesday’s statement, however, North Korea did not specify whether it would send senior government officials to the high-level talks proposed by South Korea next week near the border, as Seoul proposed Tuesday.

“We believe it is a step toward creating a system in which talks are possible at all times between the two Koreas,” said Yoon.

The Unification Ministry said in a statement that it “welcomed” North Korea’s agreement to normalize the South-North communication channel at the border truce village, adding it would discuss working-level issues regarding its earlier proposal to hold high-level talks next week.

On Tuesday, while relaying Seoul’s offer for talks, South Korean Unification Minister Cho Myoung-gyon proposed meeting on South Korea’s side of Panmunjom next Tuesday, but added Seoul would “positively” consider any other time, place or format of communication that Pyongyang preferred.

The main agenda for the first round of talks between the two governments since President Moon was inaugurated in May 2017 would be North Korea’s participation in the PyeongChang Olympics, Cho said, though Seoul would like to use the occasion to discuss other issues of “mutual interest.”

Asked by a Korea JoongAng Daily reporter whether that includes North Korea’s denuclearization, Cho only replied that Seoul would “try to convey what it needs to.”

The unification minister had urged Pyongyang to restore communication channels at Panmunjom as a starting point, saying both sides could then discuss specifics for the talks.

If the talks do take place, they would be the first official inter-Korean dialogue since December 2015.

Kim’s New Year address was the first response to Seoul’s repeated invitations to join the Olympics, set to kick off on Feb. 9 in South Korea’s northeastern counties of Pyeongchang and Jeongseon and the city of Gangneung in Gangwon, several miles from the heavily fortified inter-Korean border.

It was also the first time the North was positive about talks with the South’s liberal Moon administration, which last July offered Pyongyang to hold military talks and discuss a reunion of families separated by the 1950-53 Korean War, both to no avail.

The conciliatory vibe between the two Koreas comes at a highly sensitive time, just a month after Pyongyang bragged it has “mastered” its missile and nuclear weapons programs, now considered capable of targeting any place on the U.S. mainland.

South Korean and U.S. authorities acknowledge that the North has made significant technological advances toward that goal, but doubt it has the capability to miniaturize a nuclear bomb and perfectly hit a target after a missile re-enters the atmosphere from space.

On Tuesday, American broadcaster CBS reported that the North appears to be in the early stages of a launch cycle for another intercontinental ballistic missile (ICBM) test from the same location as its most recent test on Nov. 29, just north of Pyongyang. If the regime does conduct an ICBM launch, it would likely take place later this week or next.

U.S. Ambassador to the United Nations Nikki Haley told reporters at UN headquarters in New York Tuesday that she hoped the test “does not happen.”

But if it does, she added, “we must bring even more measures to bear on the North Korean regime.”

South Korean government officials exclusively told the JoongAng Ilbo last week that the North was preparing to launch a newly-developed reconnaissance satellite into space, possibly from a transporter erector launcher in order to dodge prior detection.

The world sees North Korea’s satellite launches as a cover for developing long-range missiles and the act is banned under UN Security Council sanctions.