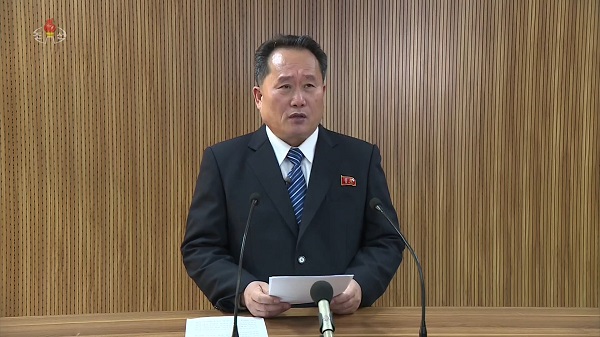 Ri Son-gwon, chairman of the Committee for the Peaceful Reunification of the Country of the DPRK, which handles inter-Korean relations, reads a statement on the state-run broadcaster Korean Central Television on Wednesday, saying Pyongyang would accept Seoul’s offer of dialogue on North Korea’s participation in the upcoming Winter Olympics hosted by South Korea. [YONHAP]

Pyongyang accepted Seoul’s offer of dialogue in a statement carried by the state-run broadcaster Korean Central Television on Wednesday, saying it would reopen its hotline at the border village of Panmunjom at 3 p.m. to discuss “practical issues” regarding its participation in the upcoming PyeongChang Winter Olympics.

The statement, read by a news anchor and issued by Ri Son-gwon, chairman of the Committee for the Peaceful Reunification of the Country of the DPRK, which handles inter-Korean relations, was described as “mandated” by North Korean leader Kim Jong-un.

Kim was quoted as saying he “welcomed” South Korean President Moon Jae-in’s positive response to his New Year’s address, in which he expressed support for sending a North Korean delegation to the Winter Games in the South, adding that both sides “could urgently meet” to discuss the move.

In Wednesday’s statement, however, North Korea did not specify whether it would send senior government officials for high-level talks with South Korea next week as Seoul had requested on Tuesday.

After receiving North Korea’s message, Yoon Young-chan, Moon’s chief press secretary, said the Blue House “thought significantly” of the North’s decision to restore the hotline. “We believe it is a step toward creating a system in which talks are possible at all times between the two Koreas,” he said.

North Korea closed all channels of dialogue with the South in February 2016 after the previous South Korean administration under President Park Geun-hye pulled out of the jointly-run Kaesong Industrial Complex following Pyongyang’s fourth nuclear test in January and subsequent long-range rocket launch.

On Tuesday, while relaying Seoul’s offer for talks, South Korean Unification Minister Cho Myoung-gyon asked they meet in South Korea’s side of the Panmunjom next Tuesday, but added Seoul would “positively” review any other time, place or format of communication that Pyongyang preferred.

The main agenda for the first round of talks between the two governments since President Moon was inaugurated in May 2017 would be North Korea’s participation in the PyeongChang Olympics, Cho said, though Seoul would like to use the occasion to discuss other issues of “mutual interest.”

Asked by a Korea JoongAng Daily reporter whether that includes North Korea’s denuclearization, Cho only replied that Seoul would “try to convey what it needs to.”

The unification minister urged Pyongyang to restore communication channels at Panmunjom as a starting point, saying both sides could then discuss specifics for the talks.

If they do take place, they would be the first official inter-Korean talks since December 2015.