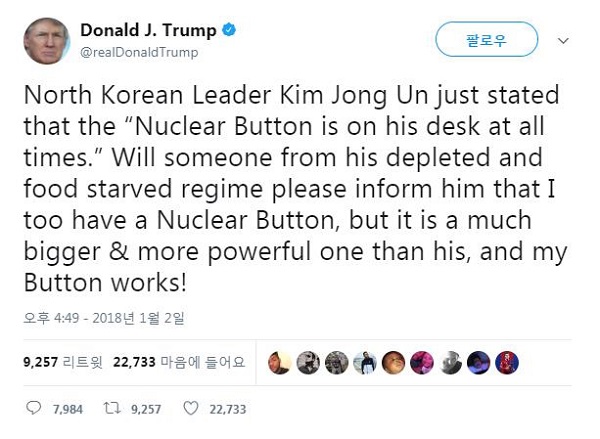 U.S. President Donald Trump boasted over Twitter that his nuclear arsenal is bigger, more powerful and more functional than North Korea’s in his latest salvo at leader Kim Jong-un.

Trump tweeted Tuesday: “Will someone from his depleted and food starved regime please inform him that I too have a Nuclear Button, but it is a much bigger & more powerful one than his, and my Button works!”

Trump was responding to Kim’s New Year’s address in which he stated that the entire U.S. mainland is within the reach of his weapons and that a “nuclear button is always on my office desk.” In the annual address, Kim also stated he is willing to send a North Korean delegation to the upcoming PyeongChang Winter Olympics.

In response, Seoul proposed high-level talks with Pyongyang next Tuesday on South Korea’s side of the Joint Security Area (JSA) to discuss North Korea’s participation in the upcoming Winter Games.

Trump’s latest statement, which could be construed as another threat of nuclear war against the North, is in line with his previous “fire and fury” rhetoric but follows a slightly more reconciliatory note struck by the president earlier that day.

He wrote in the earlier tweet: "Sanctions and ‘other’ pressures are beginning to have a big impact on North Korea. Soldiers are dangerously fleeing to South Korea. Rocket man now wants to talk to South Korea for first time. Perhaps that is good news, perhaps not - we will see!”

Trump has frequently referred to Kim as “Little Rocket Man” over Twitter and in his address to the UN General Assembly. He appeared to be referring to the defection of a North Korean soldier over the JSA in November.

Despite previously undercutting State Secretary Rex Tillerson’s diplomatic efforts toward the North, this message seemed to imply that the Trump administration’s “maximum pressure campaign” and sanctions measures were bringing results.

Sarah Huckabee Sanders, the White House press secretary, when asked during a regular press briefing Tuesday if the U.S. supports a meeting between the two Koreas, said, “The United States is committed and will still continue to put maximum pressure on North Korea to change and make sure that it denuclearizes the peninsula."

She added, “Our goals are the same, and we share that with South Korea, but our policy and our process has not changed in this.”
This could indicate a rift between Seoul and Washington over the possible move toward dialogue between the two Koreas.

U.S. State Department spokeswoman Heather Nauert told reporters on the same day, “Kim Jong-un may be trying to drive a wedge of some sort between the two nations, between our nation and the Republic of Korea.”

She added that Washington is “very skeptical” of Kim’s “sincerity,” adding, “We aren’t going to necessarily believe that Kim Jong-un is sincere and is credible in his talks.”

But she also remarked, “that is certainly their choice” if South Korea “wants to sit down and have a conversation” with the North.
Some U.S. lawmakers voiced alarm over Trump’s bellicose rhetoric.

Rep. Ted Lieu, a Democrat from California, tweeted afterward: “Freaked out by Trump's tweet threatening nuclear war with #NorthKorea?” He went onto urge support for bipartisan legislation he is co-sponsoring which would prevent the U.S. president from launching a nuclear first strike without Congressional authorization.

Rep. Jim Himes, Democrat of Connecticut and a member of the House Intelligence Committee, told CNN, “I guess the president regards this as a show of strength,” comparing the situation to a “first grade playground,” adding, “It’s usually the person who’s most aggressively pounding their chest that is in fact the weak one on the playground.”