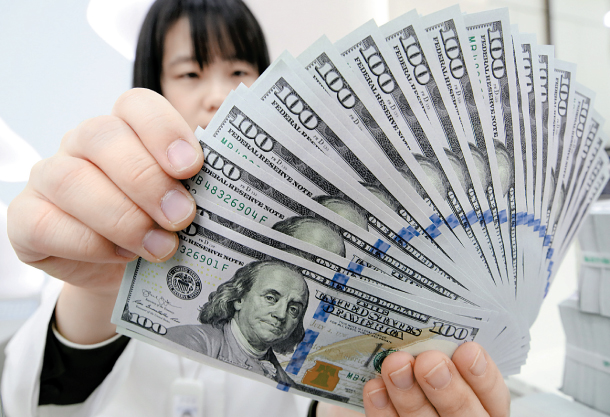 A KEB Hana Bank employee in charge of finding counterfeit bills holds up U.S. dollars at the bank’s headquarters in downtown Seoul on Thursday. [YONHAP]

The total value of the country’s foreign exchange reserves reached $389.27 billion as of the end of December, up $2.02 billion from the previous month, the Bank of Korea (BOK) said in a statement.

The December figure exceeds the earlier record of $387.25 billion set in November.

The BOK said that the recent depreciation of the U.S. dollar increased the value of non-dollar currencies when converted into the greenback.

The country’s reserve position at the IMF stood at $1.62 billion at the end of December, edging down from $1.63 billion a month earlier.

Holdings in gold bullion remained unchanged at $4.79 billion during the same period, the statement said.

The BOK, meanwhile, said that as of the end of November, Korea was the world’s ninth-largest holder of foreign exchange reserves behind China, Japan, Switzerland, Saudi Arabia, Taiwan, Russia, Hong Kong and India.