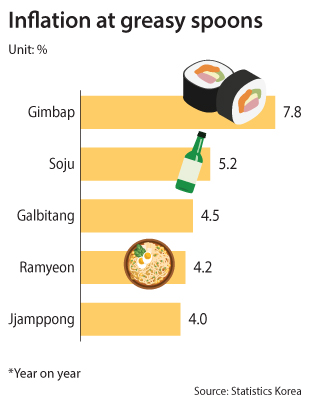 Eating out and getting buzzed is about to get more expensive this year. The latest data from Statistics Korea shows that consumer prices for restaurant food and drinks have risen an average 2.4 percent from a year ago.

The inflation is five percentage points higher than an overall consumer price hike of 1.9 percent, the statistics agency said Thursday. It is the fifth year that the cost of eating out has risen faster than overall prices.

Ironically, a lot of the dishes that saw the highest increases are typically low-priced foods enjoyed on a daily basis.

Gimbap (rice rolls) and ramyeon (instant noodles), two popular dishes that are usually eaten together, were among the top five items with the highest inflation.

Gimbap ranked No. 1 with a year-on-year increase of 7.8 percent. Ramyeon was fourth with 4.2 percent.

The price of soju at restaurants went up by 5.2 percent, ranking second on the list. No. 3 was galbitang (beef short rib soup). The dish’s price rose an average 4.5 percent and was one of the two most expensive items on the top 10 list, alongside another beef stew dish, seollongtang, at No. 7 with 3.3 percent.

The cost of eating at cafeterias increased by 2.8 percent, according to Statistics Korea. Samgyeopsal (pork belly) and tteokbokki (spicy rice cakes) both became more expensive last year by 2.6 percent.

One dine-out favorite that maintained prices last year was chicken. Its inflation was smaller, at 0.9 percent. Several of the country’s top chicken franchises had attempted to raise prices during the year but withdrew after facing fierce protest from the chicken-loving public.

The inflation at greasy spoons is a result of price increases for ingredients. A report from Statistics Korea last month showed that consumer prices of groceries rose 6.2 percent last year compared to 2016.

The price of eggs, which is a main ingredient in a handful of dishes, posted dramatic year-on-year inflation of 43.7 percent, resulting from an outbreak of bird flu on chicken farms last year.

There is little possibility that the cost of eating out will greatly drop this year.

As of Jan. 1, the country’s minimum wage is 7,530 won ($7) per hour, a record increase of 16.4 percent from last year. Most restaurants, especially greasy spoons and franchises, pay the minimum wage, and the costs will likely be passed onto consumers.

KFC and Lotteria already raised prices on some of their items late last year in anticipation of the wage hike.