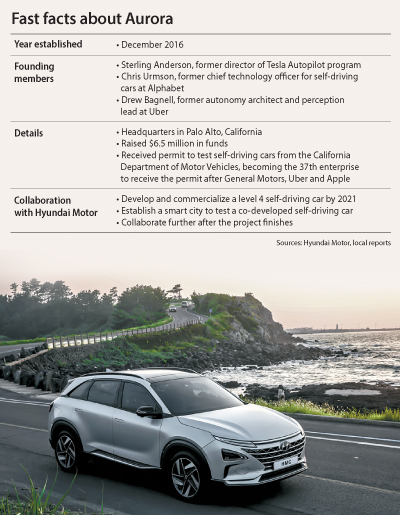 Hyundai Motor has become the first automaker to collaborate with Aurora, a self-driving car start-up led by former developers at Tesla, Uber and Google.

The Korean auto giant said Thursday that it would work with the California-based start-up to co-develop self-driving car technology and commercialize it by 2021.

The partnership, though, will not be exclusive. One of Aurora’s co-founders, Sterling Anderson, said in a Business Insider interview last year that the start-up will “work directly with automakers through non-exclusive partnerships.”

“Hyundai Motor and Aurora aim to develop top-notch autonomous car technology within the next three years and commercialize it,” Hyundai Motor said in a statement Thursday. “The Level 4 self-driving car we aim to make by 2021 will be able to drive by itself without the intervention of a driver.”

Level 4 refers to a Society of Automotive Engineers standard for self-driving cars in which vehicles can operate largely on their own.

Under the project, Hyundai Motor and Aurora will build a smart city with the infrastructure and communication tools necessary to test self-driving cars. Where the two companies will build the smart city is not yet decided.

The test vehicle, a version of Hyundai Motor’s fuel cell car, is set to be unveiled at the PyeongChang Winter Olympics next month.

A group of developers from Tesla, Uber and Google founded Aurora in California in December 2016, and it has been in the limelight not only because of its prominent founders but also because the company has kept much of its details under veil.

All that is known is that the company is developing software solutions and sensors to support driverless cars.

The start-up is known for recently receiving a permit from the California Department of Motor Vehicles to test its self-driving cars on public roads, going head-to-head with tech and auto giants like General Motors, Tesla and Apple.

After the project finishes in 2021, Hyundai Motor, Korea’s largest automaker which until now has largely worked solo on autonomous driving technology, plans to continue its partnership with Aurora.