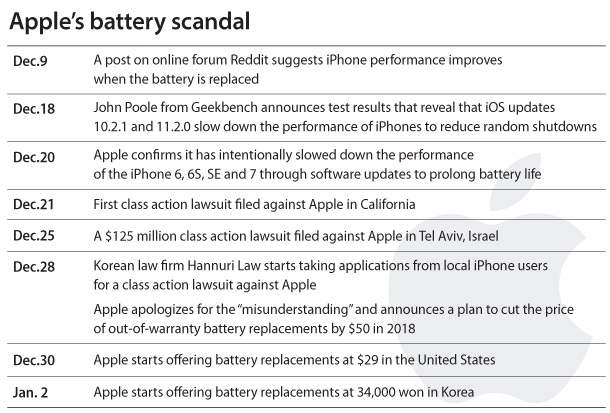 Apple’s discounted battery replacement scheme was plagued with issues after it kicked off in Korea on Tuesday, with angry customers unable to fix their iPhones due to a lack of supplies and confusion among customer service centers.

The cost of out-of-warranty battery replacement in Korea has been lowered from 100,000 won ($9.40) to 34,000 won following a number of lawsuits and complaints after Apple admitted that an iOS upgrade in the iPhone 6, 6S, SE and 7 reduces their processing power to prevent the devices from unexpectedly shutting down. Customers were unaware that the feature existed.

Despite the lower price tag, customers are still unhappy that Apple only offered discounts rather than a free recall. Their frustration has only grown after it became clear that service centers in Korea are not able to give immediate replacements due to a lack of batteries.

According to a spokesperson from Apple Korea on Thursday, customers have to check battery inventory before visiting a service center, as the recent surge in demand has rapidly exhausted supplies.

However, when a reporter called a service center in Hongdae, western Seoul, to inquire about a battery, the employee said that they cannot tell customers if they have stock or not unless they visit a service center to register.

“We often run out of stock, but you can only check inventory levels by visiting our center,” the staff said. “If there is stock you can replace your battery on that day, but if there is nothing available you will have to wait until the center contacts you after registration.”

Two other service centers did confirm over the phone that they had batteries in stock, but they also said that registration had to be made in person as quickly as possible as supplies are running out quickly. The lack of supply isn’t the only thing causing trouble for irate customers.

If phones have any other damage including broken screens, customers will have to pay the full price for those repairs before they can replace the battery.

These details weren’t widely shared with customers when the discount was first announced and iPhone users were confused about how to get their phones fixed.

Some industry insiders criticized Apple for its lax response to complaints, comparing the company with rival Samsung Electronics.

When Samsung was hit with its own battery scandal about a year and a half ago, it recalled the product within 10 days and discontinued production of the phone 54 days after its release.

“If Apple had been upfront from the beginning, customers could have been more understanding,” said Professor Jung Ok-hyun of Sogang University’s department of electronic engineering.

Although it’s too early to see what impact the scandal will have on Apple’s bottom line, the impact on iPhone sales may well be substantial.

Analyst Mark Moskowitz from Barclays said in a note Wednesday that Apple could miss out on 16 million iPhone upgrades this year, due to customers choosing battery upgrades instead.

According to Moskowitz, about 77 percent of iPhone users are eligible to upgrade their batteries at a discounted rate.