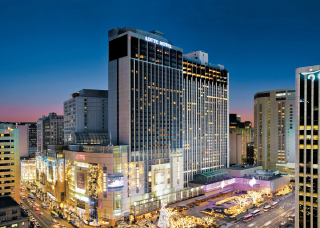 Lotte Hotel received the highest customer service score on the National Customer Satisfaction Index in 2017. In 2016, it had the second-highest. [LOTTE HOTEL]

The Korea Productivity Center’s National Customer Satisfaction Index (NCSI) measures customer satisfaction in 74 industries and 321 universities and government agencies. The study is conducted by the center, Chosun Ilbo and University of Michigan with support from the Ministry of Trade, Industry and Energy.

In 2017, the average NCSI score was 75.6 out of 100, 0.9 points higher than in 2016. The score was a record high since the index’s establishment in 1998, and numerous domestic industries pulled up the figure under tough economic conditions.

Hotels received the highest marks, a score of 84. The industry has been performing well since 2012, encompassing the top echelons of the index for six years straight. Three of the index’s top companies last year were hotels, and Lotte Hotel had the best score with 85.

Hotels also made up seven of the top 10 NCSI companies. The other three were the Daegu Metropolitan Transit Corporation, Samsung C&T and Lotte Duty Free.

After hotels, duty-free shops came in second with an average score of 82. The range, though, was wide, with a high of 84 and low of 68. The gap between the highest and lowest score was 16 points, two higher than last year.

Construction saw the highest improvement, at 2.2 points. A booming real estate market and demand for renovations were the major factors.
Among the 74 industries surveyed, more than half, 44, saw NCSI score increases. Even tax administration in 2017 saw a four-point increase.

The National Tax Service scored 76 last year after the agency increased the efficiency of its tax collection. Since October 2014, the NTS has been holding a discussion every third Tuesday where officials and experts come together to resolve tax issues.

Delays on domestic airlines have worsened recently. According to government inspections by Ministry of Land, Infrastructure, and Transport, 19.5 percent of planes were delayed in 2016, up from 10.4 percent in 2015. It seemed that failure in punctuality security had negative influence on NCSI.

Among 15 categories in which the industries are grouped, the average NCSI scores of 13 increased. The rankings of 12 industries experienced significant change.

While NCSI scores improved at the top, industries in the middle and bottom failed to satisfy customers and experienced a bigger gap with industries at the top of the ranking.