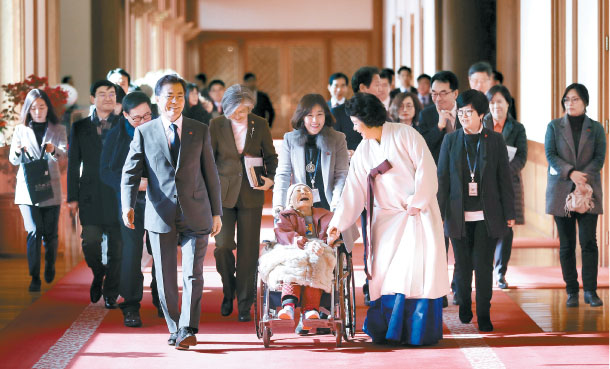 President Moon Jae-in and first lady Kim Jung-sook usher an elderly woman, who in her youth was forced into sexual slavery by the Imperial Japanese Army before and during World War II, into the dining room of the Blue House, on Thursday. Moon invited eight of the so-called “comfort women” to the Blue House for a luncheon on Thursday. [BLUE HOUSE]

President Moon Jae-in said the 2015 agreement with Japan on the so-called comfort women issue “is defective as it not only goes against the principle of truth and justice, but did not reflect the view of the victims” as he met with survivors of the wartime sexual slavery Thursday.

Moon hosted a luncheon at the Blue House for a group of eight elderly women, who in their youth were forced into sexual slavery by the Imperial Japanese Army before and during World War II. For the first time, he personally apologized to the victims for the deal, which was signed on Dec. 28, 2015 under the administration of former President Park Geun-hye.

“I, as president, convey my apologies that the deal was made without listening to your opinions and went against your will,” Moon was quoted as saying by presidential spokesman Park Soo-hyun. He called the “unilaterally reached content and procedure all flawed.”

On Dec. 27, a Ministry of Foreign Affairs task force concluded after a months-long review into the negotiation process and contents of the bilateral accord with Japan that the 2015 agreement failed to adequately address the military sexual slavery issue.

The deal included a Japanese government apology and a multimillion-dollar fund for the victims. The two countries agreed that the settlement was “final and irreversible” as long as Japan faithfully followed through with its promises.

A day after the task force’s report was released, Moon said that the 2015 agreement “contained major flaws in terms of procedure and contents,” signaling the possibility that the government may either call for a renegotiating of the deal or even scrap it.

Moon said that the government’s position would be decided after listening to the viewpoints of the victims. With first lady Kim Jung-sook, Moon greeted the survivors at the entrance to the luncheon.

Heads of civic organizations active on the issue including the Korean Council for the Women Drafted for Military Sexual Slavery by Japan and the House of Sharing - home to many of the survivors - as well as Foreign Minister Kang Kyung-wha and Gender Equality Minister Chung Hyun-back took part in the meeting.

The president emphasized that this issue would be “centered around the victims” and encouraged the survivors to freely offer suggestions, which he said would be helpful in enabling the government to reach a decision.

But he also told them, “As the president, I cannot deny the fact that it was an official agreement between the two countries, but I have made clear we cannot accept that the comfort women issue has been resolved through that agreement.”

Ahead of the luncheon, Moon visited 90-year-old Kim Bok-dong, another survivor who has been a longtime activist on the issue, at Severance Hospital in Sinchon-dong, central Seoul. He told Kim, “While we may not be able to do everything that the grandmothers wish for, the government will do its utmost, so I hope you feel ease of heart.”

“I survived a shower of bullets, so you bet I’ll be able to overcome something like this,” Kim, who is hospitalized for illnesses related to old age, was quoted as responding by the Blue House. “We need to return the Japanese fund. This issue is something that requires a legal apology and reparations.”

Last Aug. 14, Moon invited Kim to the Blue House for a luncheon for independence activists and their descendants and later exchanged Chuseok holiday greetings with her.

Moon presented her with a Blue House wristwatch and a scarf and gloves sent by the first lady.

The victims that took part in the luncheon also requested an official apology from Japan.

Lee Yong-soo, one of the survivors and activist, said that every day after the deal was “frustrating and regretful,” adding, “I wept in gratitude, as if a weight in my heart had been lifted, when the president pointed out the flaws in the agreement category by category.”

She pointed out that Tokyo has been calling for the removal of statues representing the comfort women in front of the Japanese Embassy in Seoul and its Busan consulate. “If they are so scared of the comfort women statues, then they can apologize.”