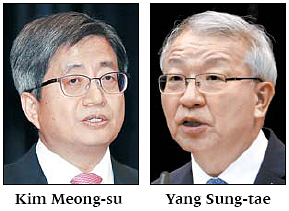 The prosecution launched an investigation into whether Supreme Court Chief Justice Kim Meong-su ordered an unlawful internal probe into an allegation that his predecessor managed a blacklist of judges critical of the judiciary’s leadership.

The Seoul Central District Prosecutors’ Office said it assigned the case to the public sector crime division Tuesday. The investigation was triggered by a petition from Rep. Joo Kwang-deok of the conservative opposition Liberty Korea Party. Joo filed the petition on Dec. 28 asking the prosecution to investigate Kim and six members of a fact-finding panel for alleged invasion of privacy, abuse of power and dereliction of duty.

The scandal began early last year when a judges’ research group on international human rights laws claimed that a senior official of the National Court Administration attempted to interfere with a seminar to discuss the need to decentralize the chief justice’s powers.

An internal probe was launched and the Supreme Court concluded in April last year that the allegation was groundless. But the research group demanded a reinvestigation, and Supreme Court Chief Justice Kim, who took office in September, ordered a new probe in November.

The reinvestigation, however, invited further controversy. Four of the six members of the new fact-finding team are judges from the research group. Chief Justice Kim was also the inaugural head of the progressive research group.

The panel investigated four computers of the former and current officials of the National Court Administration without their consent to find the alleged blacklist. Although concerns were stated inside the judiciary that the search was in violation of the Constitution and criminal laws, the panel went ahead and started reviewing documents stored in the computers starting last Dec. 26.

The search is currently ongoing, but no announcement was made as of Thursday about whether there is a blacklist or not.

Following the decision to search the computers, Rep. Joo filed a petition to the prosecution to investigate Chief Justice Kim and the investigation team, claiming that they had breached laws governing privacy and abused their power.

The prosecution is currently operating a separate but related investigation on Kim’s predecessor, Yang Sung-tae.

A civic group, Spec Watch Korea, filed a petition to the prosecution last June to investigate eight judges and then-Chief Justice Yang over the suspicion that they had created and operated the blacklist, infringing upon the independence of the judiciary.

The initial fact-finding panel, conducted under the leadership of Yang, concluded last April that the blacklist scandal is groundless.