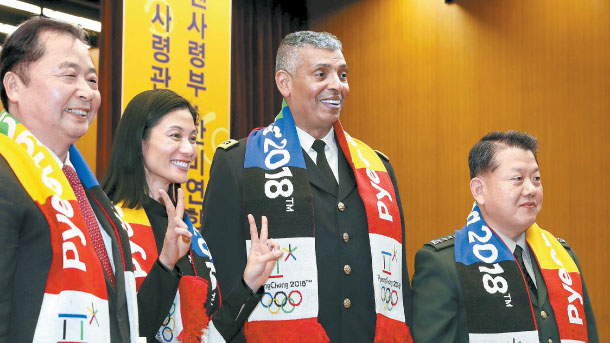 Gen. Vincent K. Brooks, third from left, commander of the U.S. Forces Korea (USFK), poses for a photo as he received a PyeongChang Winter Olympics muffler after delivering a lecture at Seoul Cyber University on Thursday. [YONHAP]

The commanding general of the U.S. Forces Korea (USFK) on Thursday stressed the importance of combat readiness and unity among regional powers to cope with North Korea’s recent peace offensive.

“We can be generally pleased by the recent overtures that happened. But we must keep our expectations at the appropriate level,” Gen. Vincent K. Brooks, who leads the 28,500-strong U.S. Forces Korea (USFK), said at a lecture in Seoul.

He was referring to North Korean leader Kim Jong-un’s New Year’s Day statement that his country is willing to join the Winter Olympics that will open in the South Korean town of Pyeongchang next month. He proposed immediate inter-Korean dialogues to discuss the issue.

In a follow-up move, the two Koreas reconnected a cross-border communication channel Wednesday, two years after it was severed, and are preparing to hold high-level talks.

This may represent Pyongyang’s sincere pursuit of reconciliation, Brooks said, but it may be in line with its typical strategy to keep apart five countries - South Korea, the United States, China, Japan and Russia - aimed at weakening their power against a regime trying to win the status of a nuclear capable nation.

“We can’t ignore that reality,” he emphasized during the session at Seoul Cyber University, organized by the National Unification Advisory Council, a presidential consultative body mainly on long-term inter-Korean ties.

In the face of the North’s peace gesture, Brooks said, it’s important for South Korea and the United States to maintain an “ironclad and razor-sharp” alliance and joint combat readiness in the event that it leads to a “negative outcome, not a positive outcome.”

He likened North Korea to the center of a palm and the five regional powers to five fingers, showing his right hand.

The North wants these five fingers to be separated but they should operate in “harmony and closely connected to one another” as a fist to create necessary pressure to cause a change in its course, he added.

As the USFK chief and commander of the South Korea-U.S. Combined Forces Command (CFC), Brooks said, his mission is to enable diplomatic and economic actions to create greater pressure on North Korea.