Is it a trap to talk?

Is it a trap to talk? 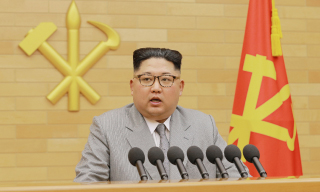 In the United States, almost the entire focus on Kim Jong-un’s New Year’s speech centered on the nuclear button on his desk. But the speech was more complicated, suggesting important changes in the North and also the risks associated with any offer from Pyongyang.

On the nuclear front, the main message of the speech was that Kim Jong-un believes that he has largely achieved his strategic objectives. He set out to marry a nuclear weapon to a long-range missile in order to achieve an effective deterrent. He now believes that the basic design issues have been solved. The task now is simply to manufacture and deploy them in adequate numbers so that he has a survivable nuclear force.

At one level, this is quite obviously a bad thing. But both missile and nuclear testing might now slow down, posing complex strategic issues. China will try to revive its freeze proposal, trading a suspension of exercises for a pause in nuclear and missile tests. This proposal can only work if it opens quickly into talks in which all issues — including denuclearization — are on the table. So far, there is no sign of North Korean interest in such talks.

Much will depend on the future of the North Korean economy, the second set of interesting messages. The speech suggests some of the growing contradictions of the North Korean model. Kim clearly believes that the Byungjin line is working: that he can simultaneously pursue economic development and nuclear weapons.

Kim has gotten some additional growth over the last five years by allowing the market economy to flourish and giving managers more autonomy. In two important passages, the speech states clearly that this process is going to continue and that local governments will also be expected to manage their economies on their own, outside assistance from the plan.

But the reality is that the North Korean economy is more and more dependent on a China that is clearly tightening the economic screws. We have all seen news of smuggling and other efforts to circumvent the sanctions. But this should not obscure the main development: that China’s posture has changed.

Which brings me to the all-important North-South peace. Moon Jae-in spent his first year seeing one proposal for engagement after another turned down. That the North is now reaching out is not a signal of strength, but of weakness: with sanctions having effect, Pyongyang is thinking about whether there are any crumbs to be vacuumed out of the South.

Everyone knows the risks, and the Moon administration is not naïve. We all know that North Korea is trying to threaten its way to the bargaining table, saying openly that the PyeongChang Winter Olympics could be at risk. And the speech reverts to the standard effort to divide the alliance by appealing to Korean nationalism and proposing that problems be solved independently of outsiders.

But is it really a trap to talk? Why? Sports have played a role in opening dialogue elsewhere.

The challenges lie in the messages that the Moon administration delivers. The first is simply to say that North Korean athletes are welcome at the games without any conditions.

Second, the Moon administration should convey that North Korea’s nuclear weapons program is one core reason for the conflict on the peninsula. No comprehensive solution — either South-North nor multilateral — can emerge if that issue is not also addressed. This is not a pre-condition for talks; it is a simple statement of political realities.

The hard part for the Moon administration is the North-South agenda, and the appropriate approach is to move cautiously. I would pick up on the promise of greater travel and dialogue not only at the government-to-government level but by NGOs and ordinary citizens. Getting South Koreans into North Korea and North Koreans out should always be an objective of policy. There is little harm in direct, small-scale humanitarian assistance.

Before moving to wider economic concessions, however, the Moon administration needs to think about what it seeks in return. Unrequited support for the regime would not only violate the multilateral sanctions regime, but send the wrong signal.

As North Korea itself said during the Six Party Talks, “commitments for commitments, actions for actions.” The question is not what the Moon administration is willing to do, but what Kim Jong-un is willing to give as well. Offering to talk should not be treated as a concession that needs to be reciprocated; it is only a starting point.

*The author is the Krause Distinguished Professor at the Graduate School of Global Policy and Strategy at the University of California in San Diego. He is the co-author (with Marcus Noland) of the Witness to Transformation blog at https://piie.com/blogs/north-korea-witness-transformation.