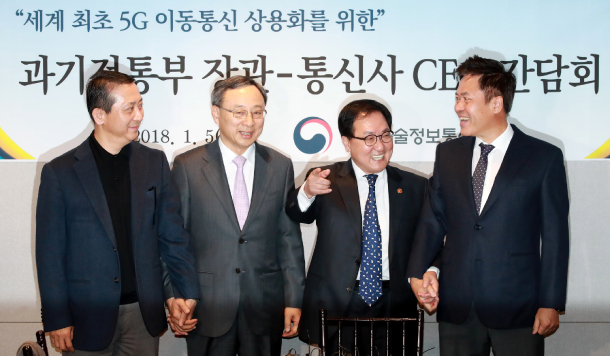 The Ministry of Science and ICT demanded local mobile carriers share the telecommunications infrastructure required to speed up the commercialization of a next-generation 5G network, mainly targeting KT, which owns most of Korea’s landline phone infrastructure.

“Mobile carriers should actively share their infrastructure to lower each other’s burden on new investment and to accelerate [5G development],” said Minister of Science and ICT Yoo Young-min at a meeting with the heads of the three mobile carriers - KT, SK Telecom and LG U+ - on Friday in Seocho District, southern Seoul. “We specially ask for KT’s help in opening up core landline infrastructure such as utility poles and cable ducts.”

KT owned 93.8 percent of the total utility poles in the country and 72.5 percent of the cable ducts as of 2015, according to data from the Science Ministry.

“We hope for good compensation [for sharing the infrastructure],” KT Chairman Hwang Chang-gyu said in response to Yoo.

Hwang’s comment is a deviation from the stance he took during last year’s national audit in October.

When the Science Ministry made a similar request during the audit, Hwang drew a clear line and said, “Opening up infrastructure not only deters new investment [in the industry] but also destroys balance in the country’s fixed-line and wireless infrastructure.”

According to the Science Ministry, setting up 5G networks calls for more investment from mobile carriers than LTE as 5G will be carried on higher frequencies. These frequencies - expected to be as high as the 28 gigahertz band - have much shorter waves, meaning base stations need to be built closer together than for LTE networks.

Park Jung-ho, CEO of SK Telecom, said during last year’s national audit that the company spent about 8 trillion establishing its LTE network, however “we would need about 10 trillion won ($9.4 billion) to establishing a nationwide network for 5G.”

While SK Telecom and LG U+ are hoping for KT to share its infrastructure at a reasonable price, Hwang’s comment on Friday spurred speculation among local industry insiders that KT will try to set the highest possible rate for sharing its infrastructure rather than not opening up at all.

The government announced its goal of commercializing a 5G network by March 2019 and establishing nationwide 5G coverage by 2022 last month and is pushing carriers to follow through. To meet the proposed goals the government has been speeding up the processes needed to establish a 5G network. For instance, the Science Ministry decided to start a frequency auction for 5G in June, a year ahead of the initial plan. A frequency auction is the process of allocating frequency bands to mobile carriers.

The focus on 5G comes as the latest technology - including self-driving cars, drones, smart cities and factories - is increasingly reliant on the network, which is up to 20 times faster than the current long term evolution (LTE) network.