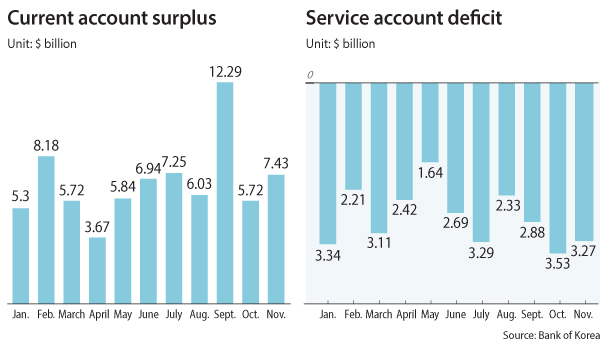 Korea’s current account posted a surplus for the 69th consecutive month in November thanks to brisk exports.

The November surplus was relatively small compared to the same month in 2016, largely due to a rise in service account deficit resulting from the number of Koreans traveling and the low level of Chinese tourists traveling to Korea after tensions over a U.S.-led antimissile system.

The trade account surplus amounted to $11.5 billion, an 18 percent increase compared to the same month a year ago at $9.69 billion. Exports in November grew 11.3 percent year-on-year to $51.5 billion thanks to huge global demands for semiconductors.

Although November’s service account deficit was smaller than the all-time record set the previous month at $3.53 billion, it was still the fourth-largest deficit at $3.27 billion.

In fact, when compared to a year ago, the service account deficit has expanded 9 percent.

The travel account deficit in November amounted to $1.55 billion, doubling the $746 million deficit registered a year ago.

The number of Chinese tourists that traveled to Korea in November fell 42.1 percent compared to the same period a year earlier to 299,000. However, the situation is likely to improve in the coming months as tensions between Seoul and Beijing have been improving since late November, with Chinese authorities approving group tours to Korea. In July when tensions were high the number of Chinese traveling to Seoul plummeted almost 70 percent.

Koreans investing in overseas equities has also continued to grow for 27 consecutive months since September 2015, largely thanks to growing expectations of a global economic recovery. Overseas equity investment amounted to $4.83 billion in November.