When the day came for Jang Joon-hwan : His acclaimed film about the 1987 protests almost didn’t happen

When the day came for Jang Joon-hwan : His acclaimed film about the 1987 protests almost didn’t happen 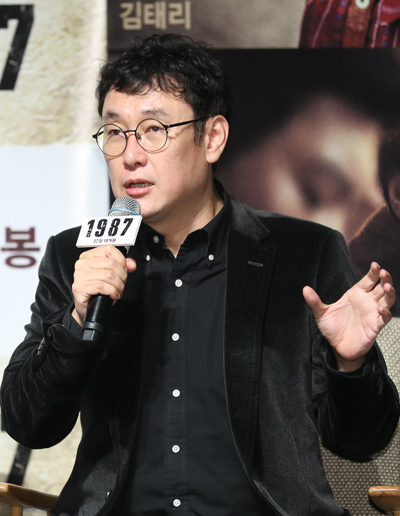 The praise for Jang Joon-hwan’s “1987: When the Day Comes” has been near universal. “There are simply no words to describe this movie,” writes one review.

The historical drama reliving the turbulent days of Korea’s democracy movement, when student activists were murdered at the hands of military police, was the last Korean-made movie releasaed in 2017, the 30th anniversary of the movement.

Although there was some concern from the distributor that the topic might be too heavy for the year-end holiday season, the work’s sincere approach to a dark period in Korean history moved the audience, and its popularity grew through word of mouth.

Jang wasn’t entirely sure if the piece would work. He wanted it to, but the director thought it might be impossible. Although he had a difficult time getting the movie going, he was able to breathe more freely when he secured the support of veteran actors who eagerly jumped on the project.

First, there was Gang Dong-won, whose appearances have turned many a film into a blockbuster. Then came Kim Yoon-seok and Ha Jung-woo, and everything else just fell into place. For Jang, who had considered making “1987” a low-budget release, the support from some of Korean cinema’s biggest names was a gift from the heavens.

Although he was a bit overwhelmed by the project’s suddenly grand scale, Jang described the process as an extended “scream of joy.” He had agonized for years over how to portray such a dark moment in Korean history while keeping the audience entertained. Now, the director can breathe a little easy.

In an interview with Ilgan Sports, an affiliate of the Korea JoongAng Daily, Jang said, “What I hope now is that the film’s message will be successfully delivered to the audience so that they can feel it in their hearts.” Below are edited excerpts from the interview. 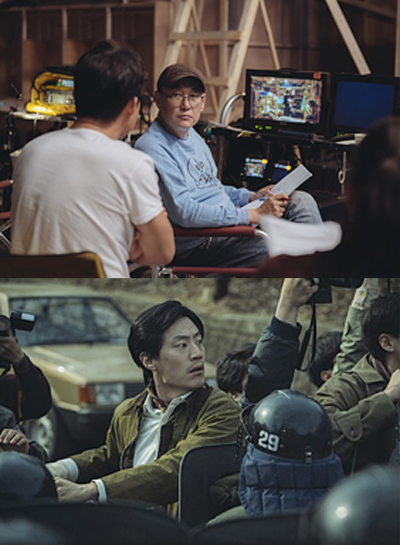 Top: Behind the scenes of “1987: When the Day Comes.” Bottom: A scene from the movie where a reporter investigates the death of a student activist. [CJ E&M]

Q. Reviews of the film are brimming with praise. Do you feel its popularity?

A. Right now, I’m just trying to stay abreast of my busy schedule because of the premiere. I’m still in a daze, but I do check reviews from time to time, and I’m relieved to see that it is generally receiving positive response. Since I had doubts about whether the film would ever be brought to life, the rush of emotions I’m feeling after the premiere is different from the past.

Because I started filming under the last administration [President Park Geun-hye’s father was a military dictator], I was feeling nervous. But now I’m finally beginning to feel that some of the weight has been lifted from my shoulders when some of the bereaved families [of students who died] gave me thumbs ups after seeing the movie.

The mix of emotions you’ve been having finally came to the surface during a press conference where you teared up. What were your feelings at the moment?

It’s really embarrassing to tell you the truth (laughs). Maybe it’s because I’m aging, but I couldn’t hold back the tears - they just automatically landed on my cheeks.

I do shed a tear or two when I see movies or read novels, but I’m not usually an emotional person. But while I was working on this movie, I cried a lot. There were rough spots now and then where I fell apart. I think it’s the amazing power of this movie.

The bereaved families also saw the movie. What did they say after they saw it?

There was a comment from the older sister of the student activist Park Jong-cheol that I treasure most. I didn’t know this before, but it seemed like there were many attempts to bring this topic to the screen, so they had doubts, and I had the feeling that they wouldn’t be satisfied with the overall plan and scenario.

But after seeing the movie, the sister said, “Thank you for depicting this part of history into a well-made movie. I am grateful.” I was so touched by her words.

What were your expectations and concerns about the film?

As the director, I thought the structure was something new and unfamiliar to the movie industry since the frame is built upon an antagonist and other characters’ stories follow behind it. I thought for this film, the audience might think, “I could’ve been Yeon-hee [the friend of a student activist] if I was there during that age,” and leave the seat as “the era’s protagonist.”

Although not everyone might feel the same way, I’m happy to see the responses that I hoped to see. There were some who said, “I felt like I was responsible, someone who can contribute to the changes taking place in this era,” after seeing the movie. I was proud to hear that.

Let’s talk about the cast. Even the smallest roles were played by amazing actors. How did that happen?

The first actor to sign up for the film, even at the risk of having his name on a government blacklist [because of the sensitive topic], was Gang Dong-won.

Then Kim Yoon-seok heard Gang was in it and said, “Let’s do it together.” Then Ha Jung-woo said, “I loved the scenario. I’m doing this because it looks like so much fun,” and he joined. This amazing cast was one of the reasons why I cried, because I was so grateful to them for making all of it possible.

Over the summer, another movie, “A Taxi Driver,” was released dealing with similar historical issues, and it successfully hit a box office record. Did you feel pressure to compete with it?

Actually, I didn’t really have time to think about comparing it with other films. When “A Taxi Driver” hit theaters in the summer, we were in the middle of filming “1987.” Our movie was talking about the history of the 1980s, and we couldn’t do it without mentioning the Gwangju uprising [the focus of “A Taxi Driver”], so I was glad to see a similar piece and happy that it produced good results being much loved by viewers.

Since the movie dealt with actual events, what were the principles and standards you kept in mind to depict the history?

The main mission and rule while making the film was to stick to the facts and stick to them as close as I could to the real stories. Next was the movie’s entertainment value. I went over how I could sculpt the characters into shape so they would be able to connect with contemporary viewers. I struggled to balance that with the truth.

Although I did want to tell the history, I didn’t want to tell it from just one perspective, which is why I put in various episodes to allow them to tell their histories and let viewers “feel” the history. But no parts of the film are false. Apart from the characters that have been exaggerated a bit, there are no scenes that are out of the line regarding facts. Only Prosecutor Choi, who was the real-life model of Ha’s character, complained a bit, commenting that “he was nowhere as drunk as the film’s character and wasn’t as cocky.”

Gang’s handsome face is a notable part of the film. Was the real student activist handsome, too?

It may differ according to people, but when I saw the picture of the student activist Lee Han-yeol, he was rather handsome. In one scenario that Gang ran through, his role was labeled “handsome student activist.” Because the film had to provide shock and awe to viewers in the latter half, I thought it would be great if Gang could play the part, and I was so grateful that he did. He was the actor who was supportive from the very start, and I couldn’t help but be touched that he signed up to star in this movie. It wouldn’t be an exaggeration to say that he was the driving force that made all of this happen, so I really appreciate his support.

Yeon-hee was the only fictional character not based on a real person. Was there a reason you made her a female college student?

I wanted to make Yeon-hee a representative of the normal people who couldn’t actively participate in the protest for democracy. I also needed a link to connect the plot, which begins with Park Jong-cheol’s death and ends with Lee Han-yeol’s death. The two deaths are actually not related at all, but I had to put both of them in the story, so I was contemplating over how to naturally connect them and that’s how Yeon-hee came into being.

She is the antagonist of the story, someone who is rather skeptical about all of these [protests] and feels that people’s efforts are the same as “beating one’s head against a wall.” But she is also someone who is trying to lead an independent life, and her two sides had to show in her words and eyes, too. The role was hard to play, and I discussed this with Kim a lot. She did well beyond my original expectations.