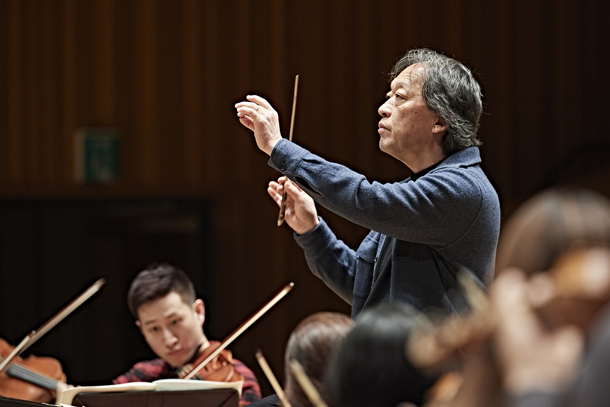 Chung Myung-whun, former artistic director of the Seoul Philharmonic Orchestra, announced Friday the official launch of the One Korea Youth Orchestra, which will stage its first concert at 8 p.m. on Jan. 11 at the Lotte Concert Hall in southern Seoul. The new orchestra is composed of 77 young musicians between the ages of 18 to 28. The orchestra is Lotte Cultural Foundation’s new corporate social responsibility project.

According to the foundation, the members have been selected from among 500 applicants through auditions that began last August. To prepare for the upcoming concert, principal players from renowned overseas orchestras such as Magali Monsnier, a principal flutist at the Orchestre Philharmonique de Radio France, and Giuseppe Ettore, principal bassist at La Scala Theater Orchestra, visited Seoul for a week to teach the young Korean musicians.

“Since I’m free from all the burdens of being an artistic director of an orchestra, I now can do what has been in my heart for a long time,” said Chung, “which is to educate young musicians of Korea about the important role they play as musicians in bringing harmony between South and North Korea.”

For the Jan. 11 concert, the orchestra will perform Beethoven’s Symphony No. 3 “Eroica” and his Piano Concerto No. 3, accompanied by pianist Sohn Jeung-beum.

Chung established another orchestra last August named One Korea Orchestra through his foundation, Miracle of Music, which is composed of 84 musicians who are already established.