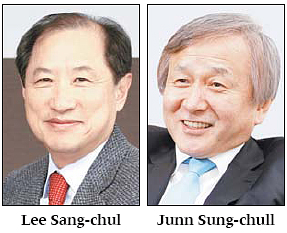 Korea’s former communications minister and chief of mobile carrier LG U+, Lee Sang-chul, was named on Dec. 18 board chairman for the CEO-training institution the Institute of Global Management (IGM).

As the head of major telecommunications companies such as KT and LG U+, Lee has been at the forefront of the so-called fourth industrial revolution in Korea.

“We expect Lee’s experience of running major mobile carriers and expertise in telecommunications technology will greatly enhance the quality of education provided at IGM,” the CEO-educating organization said in a statement.

IGM had recently set up a high-level course on the fourth industrial revolution and also offered online educations on the topic.

While he worked for LG U+, the company began to develop technologies for home automation and long-term evolution network, which is the basic infrastructure that enables 4G connections.

After graduating from Seoul National University’s Department of Electrical and Computer Engineering in 1971, Lee obtained a doctorate in electrical engineering at Duke University in 1976. He then worked as a researcher for Korea’s Agency for Defense Development in 1982 and participated in developing an army command system based on the telecommunications network.

In 1991, he entered Korea Telecom, currently called KT, and headed the carrier’s mobile operator subsidiary, Korea Telecom FreeTel, in 1996. In 2001, he became the chief for KT. He served as the communications minister in the former Kim Dae-jung administration, then from 2010 through 2015 he served as Vice Chairman for LG U+.

Junn Sung-chull, chairman and CEO of IGM, will step aside from directly running the institute and take on an advisory role. Junn, who started his career as a lawyer in America, founded IGM in 2003. He used to work for Reid & Priest, a U.S. law firm, and the law firm Kim & Chang in Korea.

“I have great trust in Lee,” Junn said, “so I plan to completely hand over [management] and go back to Kim & Chang to work as a lawyer.”