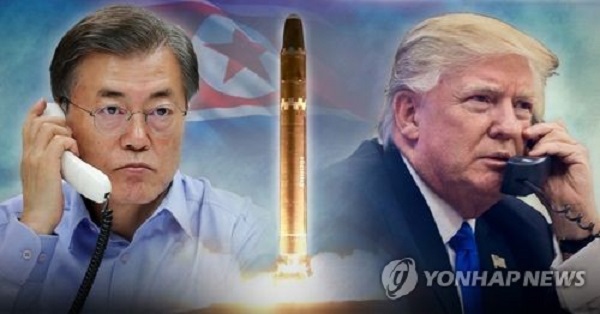 President Moon Jae-in and U.S. President Donald Trump agreed Thursday to delay annual bilateral joint military exercises to ensure the safety and success of the PyeongChang Winter Olympics, which kick off next month.

The Blue House said the two leaders held a 30-minute phone conversation at the request of the United States, in which Moon said, “In the case North Korea does not conduct any more provocations, expressing an intention to delay the South Korea-U.S. military exercises during the PyeongChang Winter Games will be a great help to ensure the success of a peaceful Olympics.”

The South Korea-U.S. Key Resolve and Foal Eagle military drills, usually held over two months in the spring, are regularly denounced by the North as a rehearsal for an invasion and have been periods of heightened military tension on the Korean Peninsula.

According to the Blue House, Moon also expressed his gratitude to Trump, remarking that his “adherence to a firm and strong position on denuclearization on the Korean Peninsula helped lead to the North-South talks” that will take place Jan 9.
“We will closely consult with the United States in the process of inter-Korean talks,” Moon told Trump, “and we are confident that it will help create an atmosphere conducive for dialogue between the United States and North Korea on resolving the North Korean nuclear issue.”

Trump was quoted by the Blue House as telling Moon to feel free to request U.S. help in the process of inter-Korean talks “at any time” and added that Moon has “100 percent support” from Washington.

Trump was also said to have confirmed he will send a high-level delegation, including members of his family, to the Olympics.
The 2018 Winter Olympics held in Pyeongchang, Gangneung and Jeongseon in Gangwon, near the inter-Korean border, run from Feb. 9 to 25 and the Paralympics Games are scheduled for March 9 to 18.

The White House said through a separate statement Thursday, “The two leaders agreed to de-conflict the Olympics and our military exercises so that United States and Republic of Korea forces can focus on ensuring the security of the Games.”
It added that the two leaders “agreed to continue the campaign of maximum pressure against North Korea and to not repeat mistakes of the past.”

The phrase about not repeating past mistakes was not included in the Korean statement, while the U.S. statement did not mention 100 percent backing for Moon or the sending of a Trump family member to the Olympics. Trump frequently criticizes past administrations’ “failed” policies toward the North, especially former President Barack Obama’s “strategic patience” approach.

A senior Blue House official told reporters Friday, “The two leaders did not directly mention not repeating past mistakes.”
Trump over Twitter indicated his support for talks and credited inter-Korean dialogue to his own “firm” posture against the North.
The president tweeted Thursday: “With all of the failed ‘experts’ weighing in, does anybody really believe that talks and dialogue would be going on between North and South Korea right now if I wasn’t firm, strong and willing to commit our total ‘might’ against the North. Fools, but talks are a good thing!”

North Korean leader Kim Jong-un on Monday offered in a New Year’s address to send athletes to the PyeongChang Olympics, and Seoul in turn proposed to hold a high-level meeting on the matter next Tuesday. Pyongyang agreed to the offer Friday.

On when the joint drills could be held, U.S. Defense Secretary James Mattis told reporters Thursday, “Exercises are not just done on military bases in defense of [South Korea]. So we worked with [the South Koreans] on it and [the exercises] will start sometime … after the Paralympics.”

“I would say for us, it’s a practical matter,” Mattis said, emphasizing that the postponement is due to “logistical” and transportation concerns with the large number of tourists expected to be in South Korea for the Olympics.

He described the proposed inter-Korean talks as being “clearly the result of the amount of international pressure,” and “a way for North Korea to start talking while keeping it contained to a benign issue.”

While he was not sure if Kim’s offer for talks is a sincere olive branch or just a “dodge,” Mattis said, “It shows the democracies and the nations that are trying to stop this from going to war…are united in trying to find a diplomatic solution.”

Heather Nauert, spokeswoman for the U.S. State Department, said in a briefing that Trump and Moon “had a good conversation earlier today” and “agreed the dialogue between the North and the South would actually be a good thing.”

She pointed that “having a good Olympics in which people can focus solely on the Olympics” was important to Washington.
“The fact that our president and that President Moon decided that it would be in the best interests of the Olympics and our government and our alliance relationship to hold off on having those… military exercises right now…is certainly fine with us,” Nauert added.

She left the possibility open that dialogue between the two Korea’s for the North’s participation in the Olympics could lead to broader talks on the nuclear issues between Pyongyang and Washington.

“I don’t want to get ahead of ourselves at this point,” she said. “We know that North Korea and South Korea are willing to pick up the phone,” referring to the restoration of the inter-Korean military hotline Wednesday after 23 months.

“We are in very close conversations and consult very closely with the Republic of Korea -- an alliance member of ours,” said Nauert, adding the United States is “synced up very well” with the South.

The spokeswoman also rejected the notion that Washington is conceding to North Korea by allowing a delay in the military exercises, calling it “a measured approach that the United States has taken.”

She continued, “The fact that Kim Jong-un’s people were willing to pick up the phone and call the Republic of Korea is a strong indication that our maximum pressure campaign is working,” adding that Washington is “pleased with where this is going right now.”

While she added Washington still remains “skeptical” about Pyongyang’s sincerity in having talks about denuclearization, she denied that it will succeed in driving a “wedge” between the U.S and its allies.

“Any nation could try to drive a wedge between us and one of our allies,” she said. “But no one is going to succeed at doing that, especially with this country, whether it comes to the Republic of Korea or Japan.”

Nauert also shot down a reporter’s question about whether North Korea is preparing to launch another ballistic missile test soon by responding, “Why do you have to be the skunk at the party?”

She added on a more serious note it was an “intelligence matter and a hypothetical,” and instead emphasized that Washington is fine with “the fact that North Korea and South Korea are willing to talk to one another,” adding “there has certainly been some progress made.”

Nauert further dismissed South Carolina Sen. Lindsey Graham’s remark earlier this week that the United States may boycott PyeongChang if North Korea participates, stating, “We are a strong ally of the Republic of Korea, and we look forward to participating in the Olympics,” adding the U.S has “a lot of athletes who have been training a very long time in order to do this.”

Trump and Moons decision to delay the military exercises during the Winter Games period was warmly welcomed by the ruling Democratic Party in Seoul Friday but had a mixed response from opposition lawmakers.

“We very much welcome the agreement not to hold the Korea-U.S. military exercises during the PyeongChang Olympic period,” said Rep. Woo Won-sik, the party’s floor leader. “Following resumption of inter-Korean talks, the possibility of successfully holding the Olympics has grown higher. We highly regard President Trump’s efforts toward resolving the Korean Peninsula issue.”

“President Moon made such a proposal at the end of last year, and President Trump responded to this,” said Democratic Party Chairwoman Choo Mi-ae said at supreme council meeting. “We have confirmed that the cooperation between Korea and the United States is closely maintained without any setbacks, so the opposition parties need to lay off groundless criticism and work toward a successful PyeongChang Olympics.”

Rep. Ham Jin-gyu, head of the Liberty Korea Party’s policy committee, said during a meeting with the main opposition party’s floor leader, “There is no reason to avoid dialogue itself for peace on the Korean Peninsula and the success of the PyeongChang Olympics. But the intention of Kim Jong-un mentioning his nuclear button and threatening the U.S. while throwing the carrot of participation in the Olympics to the South is obvious. It is a fake peace, trying to come in between the South Korea-U.S. alliance.”

Ahn Cheol-soo, head of the minor opposition People’s Party, in a supreme council meeting, advised the Moon Jae-in government not to “focus only on the short-term goals in the North-South talks and move rashly without principle or strategy.”