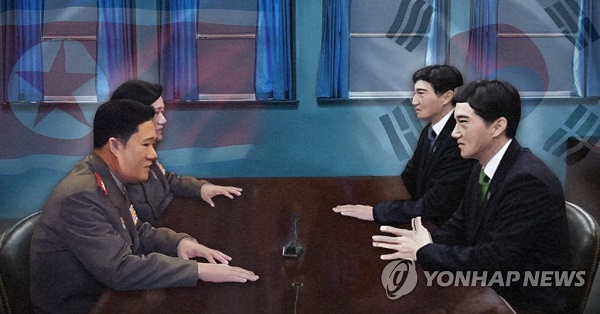 North Korea has accepted South Korea’s proposal to hold a high-level meeting next Tuesday near the border to discuss its participation in the PyeongChang Winter Olympics and other issues “related to the improvement” of South-North relations, South Korea’s Unification Ministry said Friday morning.

The ministry, which handles inter-Korean issues, said the North did not make any counteroffers to its dialogue proposal, made last Tuesday, and agreed 100 percent. The last time both governments held official talks were in December 2015.

North Korea faxed a letter at 10:16 a.m. through a recently restored hotline in the truce village of Panmunjom informing the South its representatives will travel to Peace House next week for the talks. Peace House is a building on the South Korean side of Panmunjom, which straddles the border.

The letter was sent by Ri Son-gwon, chairman of the Committee for the Peaceful Reunification of the Country of the DPRK, which handles inter-Korean relations within the North Korean government. The letter was addressed to Unification Minister Cho Myung-gyon.

Other issues regarding the talks would be settled through exchanges of faxed documents, said the ministry, including the time of the meeting, participating negotiators and specific agenda.

Baik Tae-hyun, the ministry’s spokesman, said local authorities have been preparing for North Korea’s participation in the Games on the chance the regime decided to send athletes at the last minute. He said there weren’t any problems raised so far in the country’s ability to house the extra delegation in Pyeongchang County, Gangwon, one of three locations where the Winter Games will be held.

Baik said he was aware North Korea was planning to talk with the International Olympic Committee next week to discuss its registration in the Games.

A senior Blue House official was cautious in predicting whether the two Koreas would be able to talk about any issue beyond the Olympics next week, saying Friday it was “premature to say how discussions on other topics would unfold.”

“North Korea’s participation in the PyeongChang Olympics is the highest priority,” said the official, who spoke on the condition of anonymity, adding that only after then “perhaps, if we can, we might discuss our earlier proposals.”

The Blue House said Moon asked Trump to delay the exercises during the Olympics, which kick off next month in South Korea’s Gangwon province, to ensure a peaceful Olympics, as long as North Korea refrains from carrying out any more provocations.

Pyongyang’s most recent provocation was on Nov. 29, when it fired a new intercontinental ballistic missile, a Hwasong-15, into the East Sea. Later the same day, the regime claimed it finally mastered its missile and nuclear development program. South Korean and U.S. authorities admitted that if the projectile was launched from a proper angle, it could’ve targeted the entire U.S. mainland, including Washington.

North Korea has long urged the allies to abort their joint military drills, accusing them of being rehearsals to invade the country. Until Friday, South Korea and the U.S. hadn’t budged, citing the legitimate and defensive purpose of the exercises.

The easing of tensions between the two Koreas began Monday when North Korean leader Kim Jong-un said in an unusually conciliatory New Year’s address he was willing to send a delegation to the PyeongChang Olympics and that the North and South could “urgently meet” to discuss the issue. It was the first time Pyongyang responded to Seoul’s repeated invitations to join the Games, set to kick off on Feb. 9 in South Korea’s northeastern counties of Pyeongchang and Jeongseon and city of Gangneung, in Gangwon.

On Tuesday, Unification Minister Cho suggested they meet next Tuesday. The agenda, according to Cho, would chiefly be Pyongyang’s Olympics participation, but could also include other issues of mutual interest related to the improvement of strained inter-Korean ties.

When asked by a Korea JoongAng Daily reporter whether that included North Korea’s denuclearization, Cho only answered that the South would “try to convey what it needs to.”

On Wednesday, Ri Son-gwon said in a televised statement that Kim "welcomed” Seoul’s positive reaction to his New Year’s address and ordered the reopening of the Panmunjom hotline to discuss the Olympics.

Both Koreas exchanged calls later Wednesday and Thursday but did not discuss Seoul’s high-level dialogue proposal next week. A North Korean liaison official was quoted as telling his South Korean counterpart on Thursday, “I will give you notice if I have anything to tell you.”

The Panmunjom channel had been closed for 23 months after Pyongyang decided to sever all communication between the two Koreas in February 2016 after the administration of South Korean President Park Geun-hye shut down the jointly-run Kaesong Industrial Complex following Pyongyang’s fourth nuclear test in January and a subsequent long-range rocket launch.