A rising rookie tries to top her record first year

A rising rookie tries to top her record first year 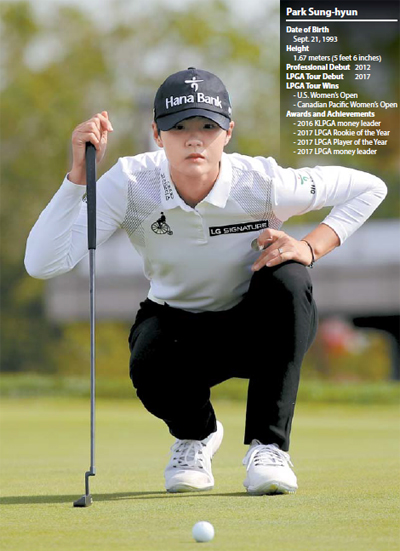 Park Sung-hyun reads the line of her putt during the 2017 LPGA KEB Hana Bank Championship at the Sky 72 Golf Club in Incheon in October. [YONHAP]

Park Sung-hyun is heading into her second LPGA season hoping to achieve more than her first.

In 2017, Park managed to win three titles - Rookie of the Year, Player of the Year and the money title - becoming the first rookie in 39 years, since Nancy Lopez, to win all three.

Despite the success, the 24-year-old golfer has rated her performance 75 out of 100, confident that she can do better in 2018.

If history offers any proof, Park can find it in the records of past rookies of the year.

In 1998, Pak Se-ri became the first Korean golfer to win the Louise Suggs Rolex Rookie of the Year Award. Pak won four tournaments in her first season, two of them majors. Among the 27 events in which Pak competed, she only missed the cut in one and made eight top-10 finishes.

Lopez, too, continued her stride into her second season. In her rookie year, 1978, she won nine tournaments, including one major title. Out of her 48 career LPGA victories, Lopez won the most in her rookie season.

The following year, Lopez won eight tournaments. She also earned Player of the Year, the Vare Trophy and money title for a second consecutive season.

Among the more recent golfers that won Rookie of the Year, Lydia Ko found the most success in her second season. Ko won two more tournaments than she did in her rookie season in 2014, from three to five, and became Player of the Year while reaching the top spot in the world ranking.

Starting with Kim Sei-young in 2015, Korean golfers were the top rookies for three consecutive seasons. While Kim and Chun In-gee didn’t play too poorly in their second seasons, they were less impactful than their first.

In 2015, Kim won three LPGA Tour events in addition to two top-five finishes at major tournaments, including a runner-up finish at the Women’s PGA Championship.

In her second season, she won two tournaments but only had one top-10 finish in a major.

During Chun’s rookie season in 2016, she won both the Vare Trophy and Rookie of the Year Award. Although her average score improved in her second season, from 69.58 to 69.41, she concluded it without any wins.

For 2018, Park has set a goal of winning three tournaments, one more than she earned in 2017. She began her offseason training in December in the United States.

With the LPGA Tour’s global expansion this season, many golf watchers expect better results from Park since she had the opportunity to play in different courses around the world in her first season and currently ranks second in the world ranking, the highest among Korean golfers. The LPGA Tour has added her to its list of players to watch in 2018.

However, it may not be easy for Park to have even greater achievements this year since her accomplishments in 2017 were already beyond impressive.