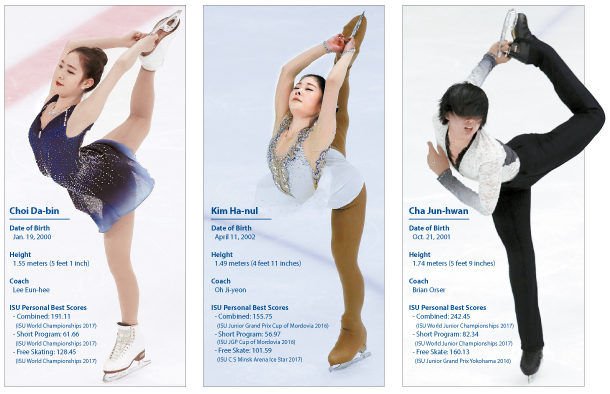 Choi Da-bin finished runner-up at the Korea Figure Skating Championship at the Mokdong Ice Rink on Sunday to qualify for the 2018 PyeongChang Winter Olympics.

After earning 64.11 points in the short program, Choi’s free skate earned her 126.01 points. Adding up the points from the two previous qualifying events, Choi finished first in overall qualifying standings with 540.28 points. Choi completed her free skate program without a single mistake.

You Young, 13, won the event this weekend, but wasn’t able to qualify for the Olympics, as she is not old enough to compete. You’s score of 204.68 points made her the first skater since Kim Yuna to exceed 200 points in domestic events.

“I’m glad I got a personal best score for this season,” Choi said.

However, Choi fell into a slump after her mother passed away in June. During the first Olympic qualifying event in July, Choi earned 181.79 points. Feeling unsatisfied, she changed the music for her free skate program this season to “Gypsy Melodies.” But she changed her mind once again this weekend, and chose music from the “Doctor Zhivago” soundtrack for this weekend’s final qualifying event.

“I’m adjusting well to the skates,” Choi said. “It’s a lot more comfortable than the new skates. I’ll adjust well and train hard [for the Olympics]. If my mom was here, she would have complimented me.”

Along with Choi, Kim Ha-nul will make her first appearance at the Olympics next month. Kim finished fourth with 114.74 points in free skate and 62.18 points in the short program.

By earning a total of 510.27 points at the three Olympic trials, Kim finished second, 21.97 points ahead of Park So-youn, who was hoping to compete at the Olympics for the second time.

On the men’s side, Cha Jun-hwan made a significant comeback to qualify for PyeongChang on Sunday.

“I couldn’t believe it after the event,” Cha said. “Since I get to compete for my dream, I want to give it my all at the Olympics.”