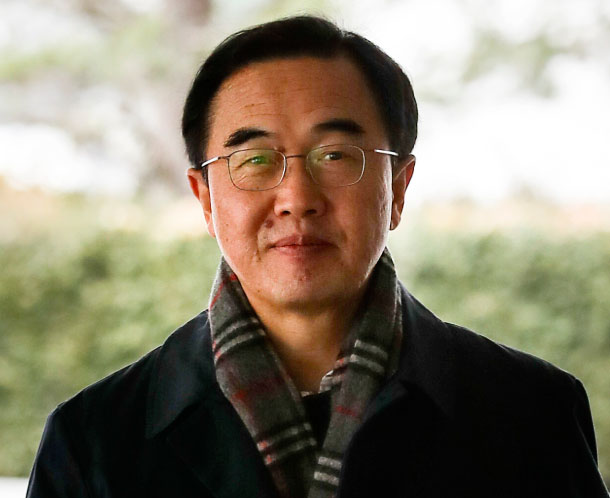 Vice Marshal Hwang Pyong-so, one of North Korean leader Kim Jong-un’s closest aides, was reportedly purged in the wake of international sanctions on the reclusive state. After the army’s financial resources were exhausted, Hwang, former head of the army’s Politburo, reportedly asked Kim to open up his wallet just a little bit to spare some money. Enraged, Kim purged Hwang immediately.

The international community’s sanctions on the North are working for the first time, as North Korean laborers overseas, who earned about $1 billion a year, are no longer employed. Kim must have suffered serious damage if Hwang suffered financial difficulties and was purged as a result. It must have been the financial hardship that prompted Kim to declare his intention to engage in dialogue with Seoul in his New Year’s address.

But the Moon Jae-in administration’s attitude is worrisome. Its glad acceptance of Pyongyang’s proposal for dialogue could help South Korea deviate from the international coalition of sanctions and weaken its alliance with the United States. At the moment, South Korea-U.S. relations are at their worst.

According to a senior source, U.S. President Donald Trump was enraged by two measures taken by the Moon administration. One, he was angry at Seoul’s decision to postpone deployment of the Terminal High Altitude Area Defense (Thaad) missile shield.

Two, he was also infuriated at the Moon administration’s public statement that there would be no additional Thaad deployment, no participation in U.S.-led missile defense and no formation of a trilateral military alliance with the United States and Japan. It is not hard to speculate why the number of Trump’s phone calls with Moon is a fourth of the number of his phone conversations with Japanese Prime Minister Shinzo Abe.

Korea-U.S. relations enjoyed a golden age from 2009 to 2016. Seven to eight channels were working between senior officials at the White House and Blue House, the State Department and Foreign Ministry, the Pentagon and Defense Ministry. Right now, there is only one channel: between Chung Eui-yong, head of the National Security Office, and H.R. McMaster, the White House’s national security adviser.

Foreign Minister Kang Kyung-wha and State Secretary Rex Tillerson should have been the key channel, but there is only cold silence between them. A senior American diplomat said that the disharmony and lack of chemistry between the two has reached an alarming level.

The essence of the problem is not Kang, but the fact that the Blue House — controlled by former student activists — is leading everything while turning the Foreign Ministry into a sidekick.

The power of the United States is mighty. President Roh Moo-hyun took office thinking, “What’s wrong with some anti-Americanism?” In his early days in office, Roh ordered his aides to analyze and brief him about the cards that the United States can play to actually make South Korea suffer.

Officials who are now working as secretaries in the Moon Blue House worked on the task. They discovered that there are over 50 cards that the United States can play to deal a critical blow to Korea’s security and economy.

The first was U.S. satellite information showing the North Korean leadership’s movements in extreme detail. The information is worth billions of dollars. If Washington decides to cut off that information, South Korea’s national security network will collapse right away.

Shocked by the briefing, Roh gave up his anti-American sentiment and turned toward pro. His decisions to send troops to Iraq and sign the Korea-U.S. free trade agreement were not made on a whim.

The Moon administration’s will to accomplish an outcome by talking to the North is good. But we must go slowly. Even if we sit down for talks, we must strengthen sanctions since they have just started showing their effectiveness. If we do so for a year, North Korea will voluntarily show up for negotiations.

Talks for the sake of talks will only help Pyongyang’s nuclear weapons development, but talks based on sanctions will be a crucial step for denuclearization of the recalcitrant regime. The liberal Moon government must accomplish outcomes through talks while maintaining a solid alliance with the United States.

During his term, President Roh said, “I realized as president that Korea is surrounded by wild dogs that want to eat us. China is a wild dog, Russia is a wild dog and Japan is a wild dog. Of them, the United States is the only country that will take our side. We have no choice but to go with them.”

Roh was never a pro-American politician. But he realized that a pro-U.S. policy is necessary for the sake of the country’s national security and interests. It is a lesson that former student activists in the Moon Blue House must remember.