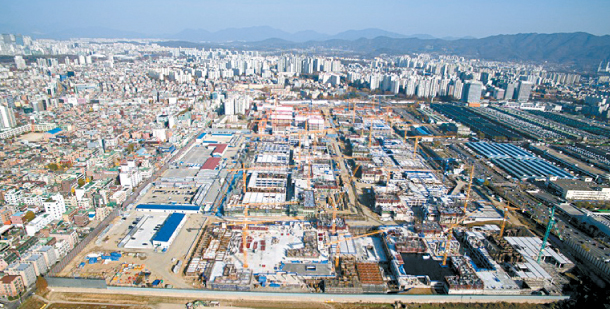 The view of Heliocity in Songpa District, southern Seoul. The apartment complex, expected to be completed late this year, is one of the most sought-after in the Gangnam region encompassing Gangnam District, Seocho District and Songpa District. [JOONGANG ILBO]

When the government clamped down on the real estate market last year, implementing strict mortgage regulations to curb what it called a runaway market, the price of one apartment in Seoul’s affluent Gangnam District saw its value plunge 150 million won ($140,000).

The real estate measures were billed as the strictest in almost a decade, and the apartment complex, which had been up for redevelopment, saw sales drop as well, from seven in July to one in August, after the government imposed the tight lending rules.

But by the end of the year, the situation had changed. The apartment’s value not only recovered to its pre-August price but also reached a new height of 1.4 billion won. In fact, the entire Gangnam region, encompassing Gangnam District, Seocho District and Songpa District, regained momentum after the so-called August measures, with apartment sales gradually rising from October to December.

According to the Seoul government, roughly 8,200 apartments in Seoul were sold in December, up 23 percent from the previous month.

In the Gangnam districts especially, apartment sales surged more than 50 percent, similar to 2006, when the real estate market was overheated, and in 2015 when it was gaining momentum. In December of 2006 and 2015, more than 1,800 apartments were sold in Gangnam.

Figures from the Korea Appraisal Board showed apartment prices in the three affluent districts saw upticks in December similar to the 2006 market. 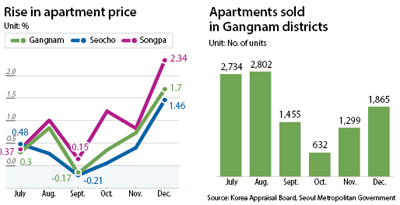 In the case of Jamsil 5 Danji, an apartment complex in Songpa District, the value of a 110-square- meter (1,184 square-foot) apartment saw a 100 million won hike last month to 1.86 billion won. The complex, located across the street from Lotte World, received approval from the Seoul government late last year to include the construction of a 50-story apartment.

A 59-square-meter unit in Seocho District’s Raemian Prestige went for 1.59 million won, while the same-size apartment at the Dogok Rexel in Gangnam District sold for 1.24 billion won last month.

Some market analysts say the recent hike will only be temporary, especially with the government set to further tighten the market.

And starting this month, when an apartment sale exceeds 300 million won, 2 percentage points will be added to the capital gains tax.

Tougher lending regulations also go in effect at the end of this month. The government will require banks to take into account all of a person’s outstanding debts - interest and principal included - when evaluating mortgage applications.

As a result of all these measures, real estate sales in Gangnam are expected to slow, but their prices still won’t be easy to control. While government regulations have lowered demand, supply is dropping fast, driving up prices.

Since August, the government has been limiting its approval of redevelopment projects in Seoul. But despite all efforts, the effect has been limited. Landlords are turning to a wait-and-see tactic, holding off on selling their properties.

The government’s education policy has added to the latest phenomenon.

With the Moon Jae-in administration set to ban independent private high schools, foreign language high schools and international high schools from recruiting new students from outside their residential area, there has been higher demand for prestigious schools in Gangnam - and apartments there.

Kwon Dae-joong, a professor of real estate at Myongji University, said that when the government limits the number of apartments people can own through loan limits and tax burdens, buyers tend to look for “blue-chip” apartments to maximize their benefits, hence the rush for Gangnam.

This month, another rule went into effect on redevelopment projects. If an apartment’s value rises by more than 30 million won after it’s rebuilt, the owner has to pay up to 50 percent of the extra profit to the government.

The regulation was first introduced by liberal President Roh Moo-hyun in 2006 to cool the overheated real estate market and prevent prices from jumping too quickly. However, the conservative Park Geun-hye administration suspended the rule in 2013, along with lowering lending limits, to boost a stagnant real estate market.

With the government back in liberal hands, Moon has restored Roh’s rule on redevelopment. But market analysts say even with its revival, Gangnam apartment prices will still continue to rise, and homeowners will simply bite the bullet and pay out the extra profit.

According to market experts, there’s not much the government can do to cool Gangnam’s hot real estate market.

One tool might be capping prices in preconstruction sales built on private land. But because this regulation only applies to apartments that are yet to be built, it is not likely to have an impact on existing apartments.

“Since the end of last year, the belief that the Gangnam real estate market will not be defeated by government regulations has further strengthened,” said Huh Yoon-kyung, senior researcher at the Construction Economy Research Institute of Korea. “It won’t be easy for the government to try to curb this trend,”