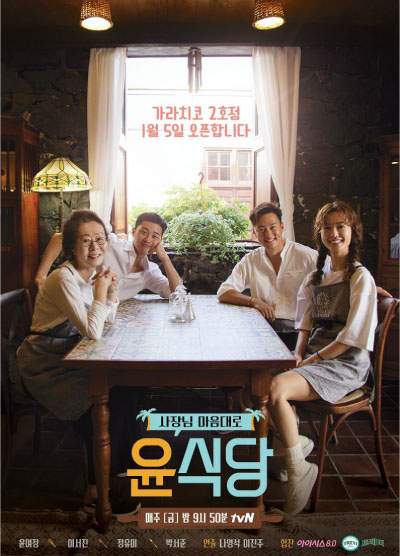 Cable channel tvN’s reality show “Youn’s Kitchen 2” is off to a strong start by garnering a viewership rating of 14.1 percent for its first episode, which aired on Friday, the network said Saturday.

The program topped the ratings list of all TV programs aired in the same time slot, earning 14.1 on average and peaking at 17.3 percent at one point.

The new series features four famous actors running a temporary mom-and-pop Korean restaurant in the small town of Garachico on Tenerife, the largest of Spain’s Canary Islands. The first season was shot in Gili Trawangan, northwest of Indonesia’s Lombok.

During the first episode, the cast members were seen preparing for the opening of the restaurant with the main dish being bibimbap, rice topped with an assortment of vegetables and meats.

Actor Lee Seo-jin said during an appearance on an online talk show Thursday that the team would shoot a third season if the ratings were over 15 percent. The segment was live-streamed via the V Live platform on portal site Naver to mark the beginning of the second season.