While the overall sales of domestic automotive companies all suffered last year, automakers have ramped up promotions for compact SUVs, the one segment that has consistently performed well.

The Korea Automobile Manufacturers Association (KAMA) also projected a gloomy outlook for this year as it expects the number of vehicles sold in the domestic market to dip 1.9 percent compared to the previous year’s 1.53 million units. 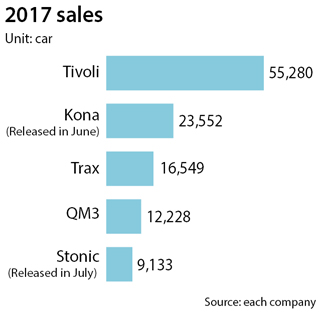 Yet the situation is different for the compact SUV market, which last year reported 116,742 units sold, up 30 percent compared to a year earlier.

The compact SUV market has grown dramatically in the last four years - in 2013 only 9,214 of the vehicles were sold in Korea.

The company that is offering the biggest discount is Ssangyong Motor. To celebrate the start of the year the company is offering a 1 million won discount to the first 2,018 customers to purchase its compact SUV Tivoli, although the discount is only available on specific models including the Tivoli Armour and Tivoli Air.

Customers who are eligible to receive the maximum 1.1 million won discount can purchase the Tivoli for 15.4 million won, making it the cheapest Korean compact SUV on the market. Rival Kia Motors cheapest model starts at 16.6 million won.

Kia Motors is not going down without a fight, offering a 500,000 won discount on its Stonic. The deal brings the price down to just over 16 million won, not as cheap as the Tivoli but still a good price for the popular Kia car.

One of the reasons Ssangyong is working so hard to attract customers is because of the growing threat from Hyundai Motor.

The Tivoli, which has topped the compact SUV market since it was introduced in January 2015, managed to hold on to the No. 1 spot last year with 55,000 vehicles sold, but Hyundai Motor is not far behind.

After Hyundai released its compact SUV Kona in June last year and affiliate Kia released the Stonic in July, Ssangyong has suffered from the dual assault on its market share. Although the Tivoli stayed on top for the year, the Kona has taken the lead in monthly sales since August.

GM Korea, which suffered a 26.6 percent fall in its domestic sales, is also hoping to attract buyers with aggressive discounts on the Trax.

The company is offering a 1 million won discount with a maximum 72 month installment plan. Under this offer the buyer only needs to pay 290,000 won a month for the next six years.

Following their recent success in the sector, Hyundai and Kia are offering less dramatic discounts than their smaller competitors.

Hyundai has been offering a 300,000 won discount to Kona buyers who print out a coupon or test drive the vehicle from any Hyundai Motor test driving center.

Korea’s top automaker managed to sell over 23,000 Konas last year, despite only launching the vehicle in June.

Kia is also offering discounts to buyers that test drive the Stonic. The company has been pushing sales since November when the gasoline model, which is 2.4 million won cheaper than the diesel model, was launched.

Renault Samsung Motors seems to have taken a step back from the competition. There are no official discounts offered to shoppers considering the QM3. It is also the only company selling its compact SUV over 20 million won, making it less appealing.

However, the company is offering a smart repair program that fixes small dents and other external damage to new buyers.

The automakers are particularly trying to win the interest of young consumers, as it has become a trend among young people to pick a compact SUV as their first car.

Hyundai is offering a free rear end warning sensor worth around 200,000 won to customers buying their first car. Combined with the 300,000 won discount, first time buyers can get a total of 500,000 won off the vehicle.

Kia is running a program similar to Ssangyong where customers who have recently got a driving license, newlyweds and people that were recently employed get an additional 300,000 won discount.