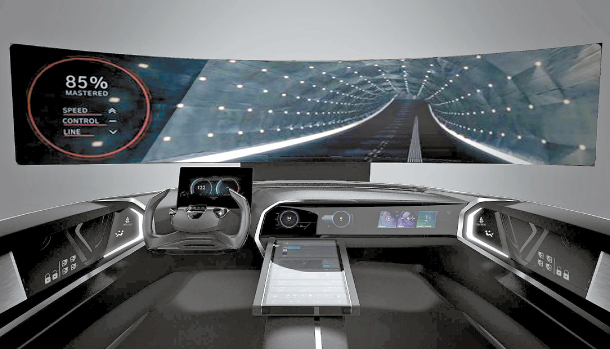 At this year’s Consumer Electronics Show, Hyundai Motor Group is offering a sneak peek at its version of a smart fuel-cell car.

Hyundai Motor will announce the name of its next-generation fuel-cell model, of which all that’s known so far is that it can run 580 kilometers (360 miles) on a single charge. It will replace the automaker’s first mass-produced fuel-cell car, the Tucson ix35 launched in 2013. Korea’s largest automaker has been pouring effort into developing fuel-cell vehicles among other eco-friendly projects.

The yet-to-be-named fuel-cell vehicle will also act as a platform for Hyundai Motor’s Level 4 autonomous driving technology that the automaker is developing with Aurora, a self-driving car start-up established by former developers at Tesla, Google and Uber.

Hyundai Motor and Aurora will announce their new partnership at CES and provide some details about their project to build a smart city to test a Level 4 self-driving car and commercialize it by 2021.

Level 4 refers to a Society of Automotive Engineers standard for self-driving cars in which vehicles can operate largely on their own.

Hyundai’s next fuel-cell model, a mass-produced version of a concept vehicle unveiled at last year’s Geneva Motor Show, is expected to launch sales in March in select countries.

At CES, Hyundai Motor will also demonstrate its voice-activated personal assistant developed in partnership with SoundHound, developer of song recognition software. The Intelligent Personal Agent is based on SoundHound’s artificial intelligence platform Houndify. It can be activated by saying “Hi, Hyundai” and responds to inquiries about making phone calls, sending text messages, searching music and arranging schedules.

Under the Hyundai system known as Smart Care, the assistant can also partially act on its own and inform drivers of upcoming appointments, then offer directions to the next appointment’s location. Hyundai’s CES booth will include a mock installation of the Smart Care system and allow visitors to experience its functions.

Hyundai and its affiliate Kia, which used to take turns participating in CES, will be in the show together for the first time this year. Kia Motors will be unveiling a concept version of its next electric Niro model.

In particular, the company will be demonstrating its Departed Driver Rescue and Exit Maneuver system that can detect when a driver has been incapacitated and safely pull the car over to the side of the road.

With CES growing beyond its typical crowd of tech firms in the past couple of years, big and small carmakers are also participating in the show.

Ford CEO Jim Hackett will deliver a keynote on the future of mobility and global trends in smart cities. Mercedes-Benz will unveil a new infotainment system called the Mercedes-Benz User Experience, and Nissan will showcase its breakthrough brain-to-vehicle technology that uses sensors to analyze a driver’s brain waves and control the vehicle’s operation accordingly.