Artifacts reveal affection for pups : To celebrate the year of the dog, exhibits highlight furry friends

Artifacts reveal affection for pups : To celebrate the year of the dog, exhibits highlight furry friends

At left, a painting of a dog presumed to be by Crown Prince Sado (1735-62) is exhibited at the National Folk Museum, and at right is “Mother Dog and Puppies” by Lee Am (1507-66) displayed at the National Museum of Korea. [NATIONAL FOLK MUSEUM, NATIONAL MUSEUM OF KOREA]

Although dogs were given a bad rap in the media last year following a number of tragic news events regarding dog bites, our four-legged friends will be served well this year as 2018 is the year of the dog. And not just any dog, but a “golden dog,” an event that comes only once every 60 years, according to the Chinese zodiac.

Two exhibitions are inviting people to learn about how ancient Koreans enjoyed the companionship of dogs throughout history.

One of them is the “Dogs in Our Lives: Companionship and Friendship” exhibition at the National Folk Museum of Korea in central Seoul. The museum has been organizing exhibitions on each of 12 zodiac animals every year for the past 12 years, and this dog exhibition completes the cycle.

Here, about 70 relics and modern works about dogs, including paintings of dogs presumed to be done by Crown Prince Sado (1735-62), as well as recent works by photographer Yun Jeong-mi and artist Jeong Woo-jae, are being exhibited, attempting to show how Koreans from past to present have always been fond of dogs. 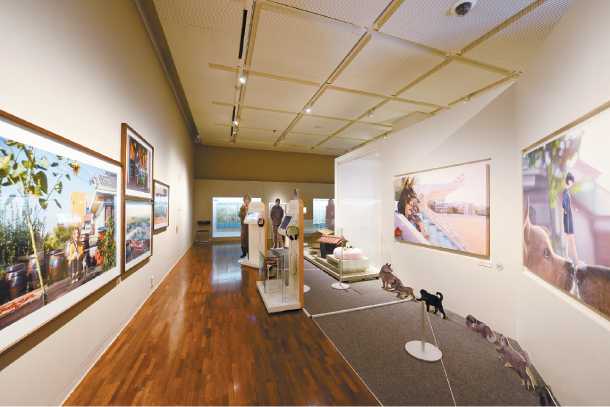 National Folk Museum in central Seoul has organized an exhibition titled “Dogs in Our Lives: Companionship and Friendship” to celebrate the year of the dog. [NATIONAL FOLK MUSEUM]

According to the Animal and Plant Quarantine Agency, about 82.5 percent of pets in Korea are dogs, proving that pups have become the favorite animal of many Koreans. They have long been a symbol of loyalty and friendliness here, and throughout Asia, the animal is considered a good omen that drives out evil spirits and guards homes.

Since when did Koreans become so attached to their four-legged friends?

According to the museum, the earliest records they’ve found regarding dogs date back to the Unified Silla period (668-935).

On a tomb relic of the Unified Silla period displayed at the exhibition, little hunters and dogs adorn the exterior for decoration. 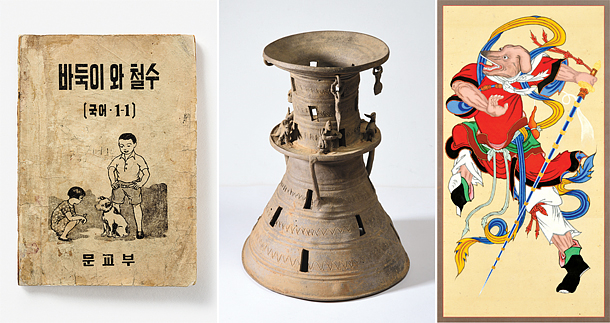 “Tomb relics of the past can allow us to witness the lives of our ancestors,” said Kim Chan-ho, who curated the exhibition. “It shows us how dogs helped hunters hunt for food and kept our ancestors company.”

There are two paintings of dogs that are presumed to be drawn by Crown Prince Sado at the exhibition. Because there are no seals stamped on the paintings to confirm it, Kim says the strokes and the style is very similar to his other paintings.

A common name for a dog in Korea is Badeuki, which refers to the game of Go. Visitors can also see how the title of a Korean Language textbook for first graders in 1948 - the first national textbook after the country gained independence - was titled “Badeuki and Cheolsoo.”

The exhibit also tries to show the relationship between dogs and people, which is becoming “more varied and intimate than the past,” according to the museum. In this section, visitors can see how dogs have become companions for modern-day Koreans.

The exhibition runs until Feb. 25.

Another exhibition is at the newly established Calligraphy and Painting Gallery on the second floor of the National Museum of Korea in central Seoul. There are about 16 paintings featuring dogs exhibited here, including Joseon-era painter Gim Du-ryang’s (1696-1763) “Scratching Black Dog” and Lee Am’s (1507-66) “Mother Dog and Puppies,” among others.

All dogs depicted in the ancient paintings are peaceful, showing that dogs were a “loving and friendly companion for the people,” according to the museum.

Lee Soo-mi, a curator at the museum, told the JoongAng Ilbo, an affiliate of the Korea JoongAng Daily, that “our ancestors were empathetic towards dogs out of the 12 other zodiac animals.”

“They were not merely animals that drive away evil spirits but a companion that always stay beside the people,” she added. “That is why the dogs in the ancient paintings are depicted in such a way.”