Both sides agree on dialogue delegations

Both sides agree on dialogue delegations 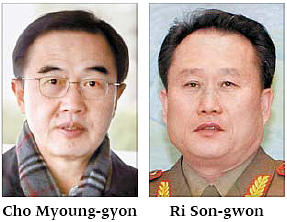 Both Koreas agreed over the past weekend that each of their top government officials for inter-Korean relations will lead a five-member delegation to the high-level talks on Tuesday, a strong hint that the improvement of ties will be discussed in the first official dialogue between the two countries in over two years.

Though Pyongyang accepted Seoul’s offer to talk about its participation in the Winter Games and other issues of mutual interest related to improving South-North relations, local government officials have been skeptical whether both sides could actually manage to talk about anything other than the Olympics, given the urgency of the matter.

The Winter Games, set to take place in the counties of Pyeongchang and Jeongseon and city of Gangneung, in South Korea’s northeastern Gangwon province, kick off on Feb. 9. In his New Year’s address on Jan. 1, North Korean leader Kim Jong-un said South and North Korea could “urgently meet” to talk about his sending of a delegation to the Games, but didn’t mention any other topic.

The Unification Ministry, which handles South-North issues, has yet to specify the agenda of the upcoming high-level talks, but said the priority would be on North Korea’s participation in the Olympics.

The Unification Ministry said it faxed the list to North Korea Saturday via a recently restored hotline at Panmunjom.

The North faxed its list Sunday, which included Ri Son-gwon, chairman of the Committee for the Peaceful Reunification of the Country of the Democratic People’s Republic of Korea (DPRK), which handles inter-Korean relations within the North Korean government; Jon Jong-su, vice chairman of the committee; Hwang Chung-song a director at the committee; Won Kil-u, vice minister of physical culture and sports; and Ri Kyong-sik, a member of the DPRK Olympic Committee.

For Seoul, it will be the first time that both the minister and vice minister of unification participate in a meeting with North Korea, a move that a senior Unification Ministry official explained was to “create a format through which both sides can naturally lead discussions to the restoration of South-North relations.”

Unification Minister Cho is known to have participated in various inter-Korean talks since the 1990s, usually on the subjects of North Korean aid and reunions for war-torn families. His North Korean counterpart Ri, who formerly led the Policy Department of the now-defunct National Defense Commission, has mainly covered working-level military talks.

The exchange of delegates came as Japan’s Kyodo News reported last Saturday that Chang Ung, a North Korean member of the International Olympic Committee (IOC), was spotted at the Beijing International Airport telling reporters that a figure skating pair from the North “will probably participate” in the Winter Games.

It is unknown whether Chang gave any names, but the only North Korean athletes who qualified for the Olympics are the figure skating pair Ryom Tae-ok and Kim Ju-sik. But they failed to register in time and the spot was given to Japan.

Kyodo News cited an unnamed source as saying Chang was headed to Switzerland to talk with IOC officials about the pair’s participation.