Trump willing to talk with Kim if conditions are set

Trump willing to talk with Kim if conditions are set 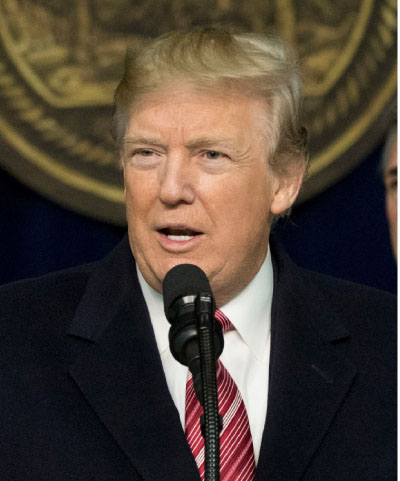 U.S. President Donald Trump said he would “absolutely” be willing to talk to North Korean leader Kim Jong-un over the telephone and that he hoped “something” comes out of the inter-Korean talks this week.

But Trump, speaking to reporters at presidential retreat Camp David on Saturday in Maryland, denied that his first conversation with Kim could be held without any preconditions. Trump didn’t specify what those prerequisites should be, but his administration has firmly stated that Pyongyang would first have to signal a willingness to denuclearize in order for them to talk.

“I always believe in talking,” Trump answered when asked whether he’d talk with Kim. “Absolutely, I would do that. No problem with that at all.”

Asked whether he wouldn’t set out any conditions for those conversations, Trump snapped, “That’s not what I said at all.”

Trump supported South Korea’s upcoming talks with the North this Tuesday near the border, the first high-level talks between the two governments in over two years, saying, “I very much want to see it work out between the two countries. I’d like to see them getting involved in the Olympics and maybe things go from there.”

Trump said Kim “knows I’m not messing around ..... Not even a little bit. Not even 1 percent.” If South and North Korea manage to get “something” out of the talks, Trump continued, it would be a “great thing for all of humanity.”

During a separate interview with the Associated Press last Friday, U.S. Secretary of State Rex Tillerson said the inter-Korean talks could be a “platform for the North to indicate interest in talks with the U.S.”

“Is this the beginning of something?” he was quoted as saying by the news agency. “I think it’s premature.” Tillerson, who late last month said the Trump White House was “ready to have the first meeting [with North Korea] without preconditions,” only to backpedal three days later, said Washington would see if Pyongyang “come with more than just wanting to talk about the Olympics.”

Trump and Tillerson both took credit for the diplomatic breakthrough between South and North Korea, saying their administration’s pressure campaign against the regime is what led Pyongyang to come to the negotiation table.

Trump and South Korean President Moon Jae-in agreed last Thursday night to delay their joint military drills until after the PyeongChang Winter Olympics in order to “ensure a peaceful” Games, but according to a local military official Sunday, the U.S. Carl Vinson Strike Group will likely stick around the peninsula “to contain North Korean provocation.”

The source didn’t specify when the strike group is planned to arrive in nearby waters, but the U.S. Navy said in a statement last Friday that more than 6,000 sailors assigned to the Carl Vinson Strike Group ships and units departed the U.S. West Coast last Wednesday and Thursday for a regularly scheduled deployment to the Western Pacific.

Meanwhile, China last Friday said it will limit exports of crude oil and refined oil products, while entirely banning steel and other metals to the North in line with the United Nations Security Council Resolution 2397, passed late last month in response to Pyongyang’s launch of an intercontinental ballistic missile on Nov. 29.