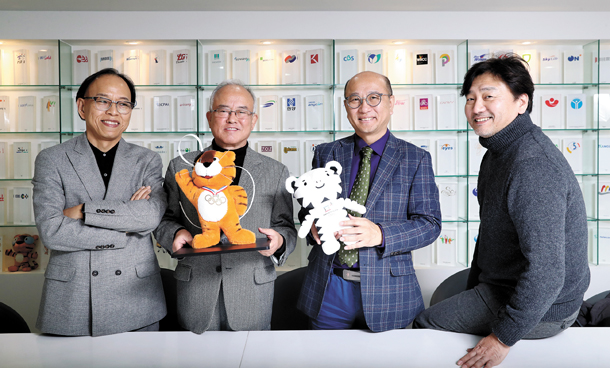 Kim Hyun, second from left, holds up the tiger mascot he designed for the 1988 Seoul Olympics. He is joined by designers who made the 2018 PyeongChang Olympic mascot, a white tiger named Soohorang, being held by Lee Hee-gon, in charge of marketing the mascot, at the offices of Design Park in Jung District, central Seoul, on Dec. 26. From left are Chang Dong-ryun, a design professor at Hongik University; Kim; Lee; and Jang In-kyu, an animation professor at Hongik. [WOO SANG-JO]

When the organizing committee of the 1988 Seoul Summer Olympics was deciding on the Games’ mascot, they had pared down over 4,000 entries to four choices: a tiger, rabbit, squirrel and pair of mandarin ducks.

The public strongly preferred the tiger, and the president of Korea did, too. When Chun Doo Hwan heard the options, he reportedly barked, “Rabbit? What rabbit? Tiger it is.”

Nearly three decades have passed, and the tiger has returned once again, this time as the mascot of the 2018 PyeongChang Winter Olympics.

“Tigers symbolize and best capture the sentiment of the Korean people,” the designers of the 2018 mascot said.

Hodori was the mascot at the 1988 Summer Games. He was an orange Siberian tiger with a traditional Korean hat known as sangmo and a ribbon in the shape of an “S” symbolizing Seoul. His lineage continues with Soohorang, a white tiger representing the 2018 Winter Games.

Tigers frequently appear in Korean art and legends as guardians. The mascot’s designers, in an interview at their office in central Seoul on Dec. 26, explained that they chose the animal because it is often associated with humor, bravery and nobility.

Kim Hyun, 69, designed Hodori for the 1988 Olympics and made the final touches on Soohorang. He is the founder of Design Park, a company that has been in charge of designing mascots for the Olympics as well as other famous logos, including ones for the carbonated beverage Chilsung Cider, YTN news agency and LG Twins baseball team.

“I’m pleased that the white tiger got selected as the mascot as I hoped,” Kim said. “It has been 30 years since the last Olympics [in Korea], so Soohorang is pretty much the son of our Hodori.”

Soohorang derives its name from “sooho,” meaning protection in Korean, and “rang,” from the middle syllable of the Korean word for tiger “horangi.” Bearing the PyeongChang 2018 logo on its chest, the white tiger “symbolizes the protection offered to the athletes, spectators and other participants of the 2018 Games,” according to the Olympic committee.

“The popularity of Hodori at the time influenced our decision,” said Chang Dong-ryun, a design professor at Hongik University. “[Soohorang] is the result of us brainstorming on how we could show the growth and development of Korea since that time.”

For the PyeongChang Olympics, the Jindo dog was also a nominee for mascot but ranked second in public polls. The Jindo is a native Korean dog commonly owned as a pet to guard the home.

“The Jindo is also nice,” said Jang In-kyu, an animation professor at Hongik University, “but when we drew it, the design also looked like it could be a Shiba [a native Japanese dog], which is difficult to distinguish from the Jindo.”

Although the Jindo is bigger by two to seven inches, both dogs have similar appearances, with their curled tails and long snout, and are often confused with one another.

“Tigers symbolize the affection of the Korean people,” said Lee Hee-gon, who is in charge of advertising the mascot through the consulting company Mass C&G, “and Soohorang’s creation was inspired from a Korean folk painting of a tiger and magpie. We adapted a modern version of the tiger in the painting to reflect the present.”

Designers said the message that Soohorang would bring and its resonance among people were the first elements that they considered when creating the mascot.

Kim initially proposed the white tiger as a mascot before the PyeongChang Olympics gained traction in 2011. “Compared to Hodori,” he said, “Soohorang has a more minimalist and simple design.”

The International Olympic Committee currently owns all copyrights to the mascots. However, the designers see potential in deriving a national emblem from the tiger mascots.

“Because it’s difficult to use the exact copies of the mascots,” Chang said, “we need to come up with a way to build and expand on the theme of the tiger if we want to make it a national brand.”

“Just as the United States has the bald eagle, Russia the bear and China the panda,” he said, “an animal can become a national symbol and a huge asset to the nation.”