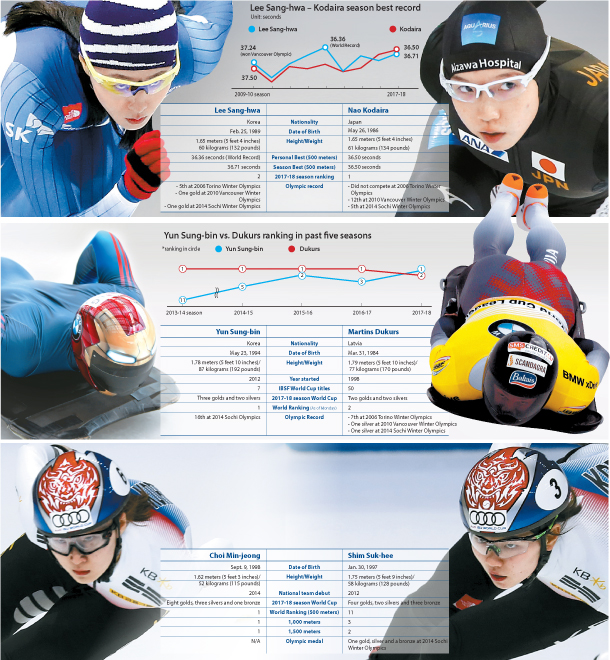 As the 2018 PyeongChang Winter Olympics fast approaches, athletes and organizers are racing against the clock to finish their preparations with just 30 days left.

While the athletes are concentrating on training for the Games, some fans and experts have started to think about the medal table. There will be a record 102 gold medals awarded at the PyeongChang Olympics, and the host nation has set its sight on a fourth place finish.

Korea’s current best finish was in fifth place at the 2010 Vancouver Winter Olympics, with a total of 14 medals. For the first time, Korea will participate in all five events in figure skating - men and women’s singles, ice dance, pairs and the team event. In addition, the men’s and women’s ice hockey team have qualified for the Olympics for the first time.

This year Korea hopes to win a total of 20 medals including eight golds. To do so, the athletes are going to face some serious competition from some of their biggest rivals.

Foes on the fast track

Speed skating earned its fame during the 2010 Vancouver Winter Olympics, when Korea dominated the event by winning three gold medals. Winning one gold would have been impressive enough, as the Netherlands is considered a powerhouse when it comes to speed skating, but the sport became even more popular when Lee Sang-hwa successfully defended her title in the women’s 500-meter race at the 2014 Sochi Olympics.

The 2014 Games had a big impact as Lee was the only Korean speed skater to win a gold and secured the top spot in two consecutive events. At the time, there were no other skaters that could challenge Lee. She has her eyes set on defending the title again in PyeongChang, but this time it won’t be so easy. Although Lee is the reigning Olympic champion, she enters the Games this year as a challenger to Nao Kodaira of Japan, who is now the world No. 1.

“My only rival is myself,” replied Lee when asked if she thought of Kodaira as her rival.

After the 2014 Sochi Olympics, Kodaira headed to the Netherlands to study and received training from Coach Marianne Timmer, a two-time Dutch gold medalist for the 1,000-meter and 1,500-meter races at the 1998 Nagano Olympics.

The stint in the Netherlands clearly paid off, as shown by her performance in recent ISU World Cup events.

In the four ISU World Cup events so far this season, Kodaira won the women’s 500 meters every time. Looking at her recent performance, Kodaira will certainly give Lee a challenge during the PyeongChang Olympics.

Kodaira broke her personal best with 36.50 seconds at the fourth ISU World Cup Speed Skating competition this season in December, but Lee still holds the world record at 36.36 seconds for the women’s 500 meters in the 2013 World Cup meet at the Utah Olympic Oval in the United States.

Lee may not be racing as well as she did in 2013, but she has been slowly improving her performance based on the four ISU World Cup races so far this season. During the fourth and final race before the PyeongChang Olympics, she clocked 36.71 seconds, her personal best for the season. Lee is now only 0.21 of a second behind Kodaira, a full second less than at the start of the season.

Just as speed skating grew in popularity after a surprise gold medal at the 2010 Vancouver Winter Olympics, this year it is likely that skeleton is going to burst onto the scene in Korea. After only five seasons of playing the sport, Yun Sung-bin has risen to the top of the World Ranking in the Olympic season.

Skeleton, where athletes race down a 1,500 meter (0.93 of a mile) long track at a speed of 140 kilometers (87 miles) per hour while lying face down, has been dominated by Martins Dukurs of Latvia for a while. As Dukurs’ father was a bobsledder, he started racing skeleton at age 14 and became a member of the Latvian national team at age 19. By winning four IBSF World Cup races during the 2009-10 season, Dukurs climbed to the top of the world rankings, where he stayed for eight consecutive seasons.

With such a dominant player in the top spot, Yun could only dream of reaching No. 1 when he first started competing at international events in 2013. Yun’s hard work has finally paid off this season, as he improved his head-to-head record against Dukurs to four wins and two losses.

Not only Yun, but Dukurs will also be working extra hard to win a gold at the PyeongChang Winter Olympics. Dukurs has won a total of 50 IBSF World Cup races throughout his career, but he has never won a gold medal at the Olympics. The 33-year-old racer has only won two silver medals in the three Olympics he competed in. By winning the World Cup race in Pyeongchang in March 2017, Dukurs has raised his expectations that he could take home his first gold.

Yun is hoping that the home-track advantage will give him the edge. After another World Cup race in St. Moritz, Switzerland, Yun will be returning to Korea and will train at the Alpensia Sliding Centre. Since foreign athletes are not permitted to train on the track until Feb. 13, Yun has the place to himself for a few weeks and hopes to memorize the track by sliding down it as many times as possible.

While other athletes face challenges from outside Korea, the women’s short track speed skaters are the biggest threat to each other. The Korean women’s short track team hopes to beat their record of three golds and one silver at the 2006 Torino Winter Olympics. The goal will only be possible with the help of Choi Min-jeong and Shim Suk-hee.

In the four ISU Short Track World Cup races so far this season, the women’s team has won ten medals out of a total of 16. Of the ten, Choi won six and Shim won two, while the other two gold medals were from the 3,000-meter relay race.

As the two skaters were taught by the same coach, Cho Jae-beom, they are perfect partners. However, as the gold medal is only awarded to one skater outside of the relay race, they are also each other’s biggest rival.

Choi went from strength to strength this season, ranking first in even events. Even in the 500 meters, considered Korea’s weakness, Choi won a gold and a silver, raising fans’ expectations that the female skaters could win all four events at the PyeongChang Games.

While Choi enters the Winter Games topping the world ranking, the Olympics has always been Shim’s event. At the 2014 Sochi Winter Olympics Shim dominated the Korean women’s team, leading the 3,000-meter relay team to a gold medal as well as taking home a silver in the 1,500 meters and a bronze in the 1,000-meter race.

Although Choi and Shim are at the top of the ISU rankings, they’ll still need to be aware of foreign skaters, especially Kim Boutin of Canada. Throughout the four World Cup races this year, Boutin has won nine medals - two golds, six silvers and a bronze. Elise Christie of England is also a strong contender in the women’s 500-meter race.