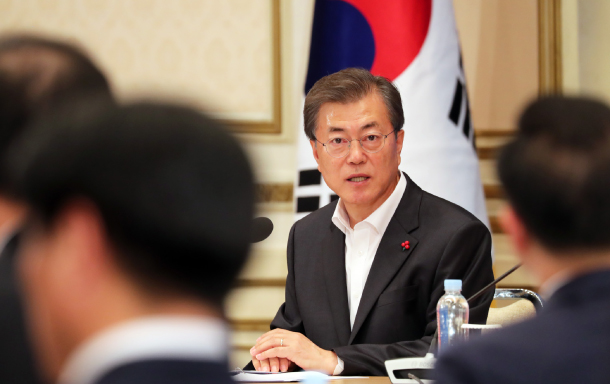 President Moon Jae-in presides over a meeting to achieve innovation-driven growth last year at the Blue House after facing controversy over his income-led growth strategy. [YONHAP]

The press in the New Year carried an upsetting finding by the Ministry of Employment and Labor. According to its investigation of self-employed businesses over the final six months of last year, eight out of 10 cheated their employees, paying below the hourly minimum wage or delivering wages late. The exploitation was most serious among restaurants, gas stations and beauty parlors, businesses that mostly employ young people.

There must something wrong if 80 percent of self-employed businesses were ripping off their workers. The law’s effectiveness should be questioned if the majority cannot obey it. It could mean that the government may be forcing something the market cannot keep up with. This cannot be fixed through fines.

The minimum wage is the least a worker should be paid for his or her labor. To the employer, it also should be the wage base that he or she can offer for labor. But the ministry’s finding suggests that most shop owners cannot afford to pay the minimum wage. As result, they have become criminals. Conflict is deepening at workplaces, causing uncomfortable scenes between employers and employees.

The 16.4-percent hike in the minimum wage has triggered strife among the poor and worse-off. The government refereed by offering to pay shop owners and small-time employers subsidies to compensate for the spike in wages. The government helping out private employers to pay their employees is distortion of market activities.

The subsidy given to small businesses is questionable. Instead of waiting for government handouts, employers are cutting staff to save costs. They are more reasonable than the government, which is digging into tax money to make up for its policy fallout. The government should not have triggered conflicts in the workplace in the first place.

The government aspires to stimulate growth through innovations and increases in income. Innovations lead to higher income, as improvement in competitiveness is rewarded. But innovation is born from competition. Few would want to spend time and money on innovation if they can earn money without competition. The principle applies to every economic activity, from hiring to selling products overseas.

Has the government endeavored to come up with policies that can hone competitiveness and back innovation? The answer is no. The government has been giving one burden after another to enterprises to the extent of suffocating them. The government is upping the corporate tax rate while other countries are vying to make taxes lower for enterprises.

It fined a franchiser when it did not comply with an order to hire all of its subcontractor workers on a permanent basis, even when the agencies have been working with the company for years as business partners. It does not differentiate different businesses and enforces a uniform set of measures — higher wages, permanent workers and shorter work hours — on all employers. The government has even made employers disclose the status of their workers — how many are on the permanent payroll and how many are not.

As companies show signs of packing up to take their work overseas, Trade, Industry, and Energy Minister Paik Un-gyu urged them to refrain from closing down factories at home and going offshore. He is merely pleading for patriotism if he wants companies to continue to endure such measures. The government is also sensing there is something wrong in its way. It can hardly claim it is promoting innovation.

There are few signs of help from the labor union towards improving productivity and innovation. Why would the union want to make an effort when it gets what it wants in wages and other terms when it protests and walks out? Income should be earned, not given. To win rewards, workers must endeavor to better the productivity and competitiveness of their products and services. Income is not welfare.

The government hardly can expect to do well in promoting innovation and competitiveness in private business when it does such a poor job managing the public sector. Public enterprises seem to run entirely on favoritism. Performance and blind hiring are all just talk. There would be fewer public institutions if not for their questionable hiring practices.