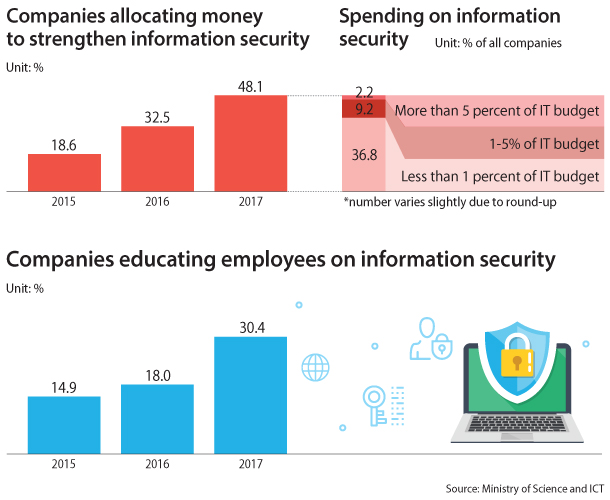 A software engineer surnamed Shin who works for a manufacturing company in Songdo, Incheon, was called to work on a Sunday morning after ransomware crashed several computers at the company in June last year.

Ransomware is malicious software that encrypts data from victims’ computers to make it inaccessible until a ransom is paid for decryption.

After the attack, Shin’s company decided to enhance its security by employing upgraded antivirus software with better virus detection and data protection capabilities. Also, while Shin used to backup data to external hard drives once a week, he now saves it to an external disk every day in case the automated backup system breaks down.

As ransomware attacks and hacking become more prevalent following the development of Internet of Things technology, more companies are scrambling to enhance their information security.

According to a survey by the Ministry of Science and ICT released on Monday, 48 percent of the 9,000 businesses that participated in the study said they have allocated a budget to strengthening information security in 2017. The figure is a 15.6 percentage point increase compared to the previous year.

Those that allocated more than 5 percent of the company’s IT budget to enhancing security doubled from 1.1 percent in 2016 to 2.2 percent last year.

Last year, a spate of ransomware attacks and internet-protocol camera hacking shook the nation and raised concerns over information leaks. The most notorious incident was the WannaCry malware attacks, which spread to over 150 countries including Korea.

The majority of firms that allocated a budget for information security allocated less than one percent of their IT budget to information protection.