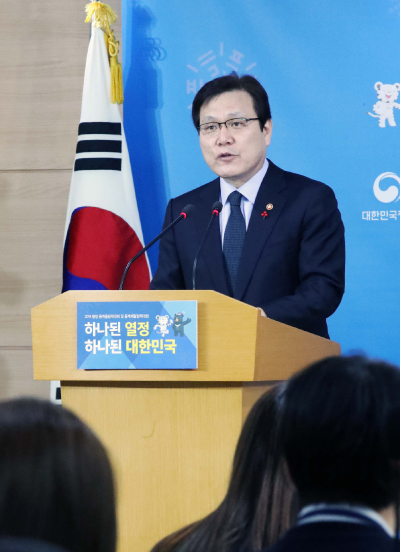 Choi Jong-ku, chairman of the Financial Services Commission, explains the regulator’s stance on cryptocurrency trading on Monday at the government complex in central Seoul. [YONHAP]

Korea’s top financial regulator reiterated the government’s stance that it will curb cryptocurrency trading in Korea to cool down the market, going as far as completely shutting down the exchanges if necessary.

Choi Jong-ku, the chief of the Financial Services Commission, said on Monday the government is currently considering all the options including the closing of “businesses that sell digital currency” in dealing with bitcoin fever in Korea during a press briefing at the government complex in Gwanghwamun, central Seoul.

Cryptocurrency exchanges are registered as online brokers in Korea, classified the same way as e-commerce platforms such as Coupang are.

Choi also explained during the briefing that the government will continue to try to limit the cryptocurrency trading in Korea by taking different approaches, including inspecting the banks that provide virtual account service to the exchanges. The Financial Intelligence Unit, a body under the Financial Services Commission that monitors illegal financial activities such as money laundering, has launched a joint investigation with the Financial Supervisory Service, Korea’s financial watchdog, into six major banks on Monday.

“Through the investigation, the government will see whether the bank has complied with their duty to prevent any illegal activities when they provide virtual account services,” said Choi. “If we find anything inappropriate or illegal, we will force them to stop the service. While this isn’t a direct regulation [for the exchanges], we expect the initiative will block a large volume of trading, possibly stalling it completely.”

Choi also said the authorities have the option to directly regulate the exchanges, although they currently lack the necessary regulatory framework to do so, meaning they need a special legislation. The regulator is also seeking cooperation with counterparts from China and Japan, saying that the three countries will exchange ideas and policies on the matter.

“The ultimate goal of the commission is to prevent illegal activities in digital currency trading [such as money laundering and price fixing] to provide at least some level of protection to the consumer,” said Choi Hoon, a director-general of bank and insurance bureau at the Financial Services Commission.

But Choi added that as exchanges are registered as online brokers, it’s difficult for the commission to regulate their activities, which is why they decided to monitor banks that provide account services instead.

While the government continues to roll out different approaches to curb cryptocurrency trading in the local market, some experts say that such regulatory measures could further increase the value of the coins.

“The regulatory moves by the government … will increase the scarcity of digital currencies and [eventually] raise their value,” said Moon Hong-cheol, an analyst at DB Financial Investment, in a report released Monday.