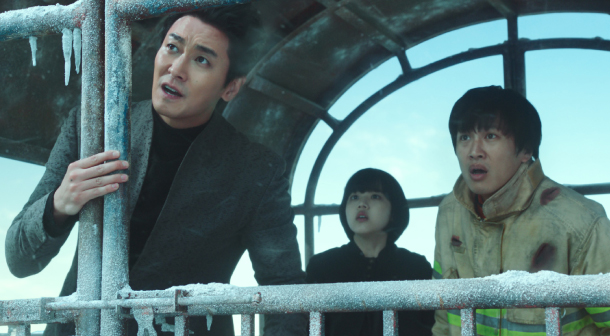 “Along with the Gods: The Two Worlds” landed at the first spot for the third consecutive weekend. [LOTTE ENTERTAINMENT]

Korea’s weekend box office did not see any major shifts over the weekend as fantasy adventure drama “Along with the Gods: The Two Worlds” came in first for the third consecutive weekend, while historical drama “1987: When the Day Comes,” held strong in second place.

But action drama “Steel Rain,” which is one of the three big-budget movies released last month, dropped two spots following the debut of “Jumanji: Welcome to the Jungle” and “The Story of Ferdinand.”

“Along with the Gods,” adapted from Joo Ho-min’s successful webtoon of the same title, sold 1.32 million tickets at 1,257 screens from Friday to Sunday, accounting for 36.4 percent of the entire weekend sales. Since its release on Dec. 20, the blockbuster has raked in a total of 92.5 billion won ($83 million) through sales of 13.2 million tickets.

Despite controversy over having diverged from the original story featured in the webtoon, the Kim Yong-hwa-directed movie, starring Ha Jung-woo, Ju Ji-hoon and Kim Hyang-gi, managed to become the first film to have sold more than 10 million tickets this year - the feat it achieved 16 days after its release.

The historical drama “1987,” which depicts the turbulent days of Korea’s democracy movement, when student activists were murdered at the hands of the military police, came in at second in its second weekend with 1.01 million admissions sold. The film saw a boost in buzz over the weekend after President Moon Jae-in watched the flick in central Seoul on Sunday. “1987” has sold a total of 4.1 million tickets since it landed at theaters on Dec. 27.

Action adventure movie “Jumanji: Welcome to the Jungle,” a sequel to the 1995 feature film starring Robin Williams, sold 657,000 admissions in its debut weekend.

The fantasy comedy, starring Dwayne Johnson and Jack Black, tells the story of four high school students who get sucked into an old video game called “Jumanji,” has been on the receiving end of a great deal of praise from critics, many of which found the film to be better than expected.

The animated “Ferdinand” arrived at fourth in its first weekend while the local action drama “Steel Rain,” starring Jung Woo-sung and Gwak Do-won, rounded out the top five.