‘We may see progress in dialogue with Pyongyang’

‘We may see progress in dialogue with Pyongyang’ 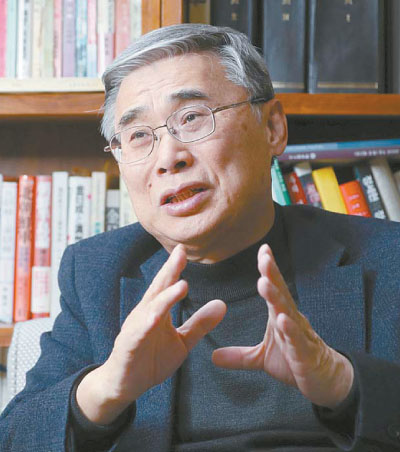 Lee Jong-seok, former unification minister, is one of the country’s leading experts on North Korea. In 2007, he helped organize the inter-Korean summit meeting while serving as deputy head of the National Security Council under former President Roh Moo-hyun. Currently, he is considered to be President Moon Jae-in’s trusted mentor in unification, diplomacy and national security affairs, along with other dignitaries including former unification ministers Lim Dong-won and Jeong Se-hyun and special adviser Moon Chung-in.

In an exclusive interview, the JoongAng Sunday, an affiliate of the Korea JoongAng Daily, sat down with Lee last Friday to hear his thoughts on the future of North-South relations.

Q. Why do you think North Korea suddenly showed interest in active inter-Korean dialogue in the New Year?

A. In his New Year’s address, North Korean leader Kim Jong-un declared that his country had completed nuclear weapons capabilities, in effect implying that he now had the strategic ability to deter American attacks. Kim’s next task would be to break through UN pressure and revive his struggling nation. He is hoping to achieve this by improving inter-Korean relations, especially through the 2018 PyeongChang Winter Olympics.

Did the UN sanctions and pressure produce the desired results?

The ultimate objective of the sanctions was to force North Korea into denuclearization. Though Pyongyang is in severe financial distress, it’s difficult to elicit a change in attitude from the regime. The UN has not yet achieved its intended goals of the sanctions.

Why didn’t the sanctions have an effect on the regime’s stance?

North Korea has always faced sanctions ever since its second nuclear test in 2009. Because it now has a stable, self-sufficient economic system, however, the North won’t descend into another famine like in the 1990s. Recently, the TV channel JTBC aired an exclusive documentary on its reporter’s 3-week journey to the North Korean cities of Pyongyang and Wonsan during October and November 2017. The reporter noticed that most store products were now manufactured domestically instead of being imported from China, unlike a few years ago. Despite external pressure and sanctions, North Korea is coming close to achieving full economic autarky.

Do you expect the inter-Korean high-level talks scheduled for Jan. 9 to bear any fruit?

Kim was talking of a comprehensive improvement in inter-Korea relations when he mentioned North Korea’s participation in the Winter Games. North Korea’s current policy direction depends on Kim’s strategic decision-making. I think the talks will proceed without trouble. Pyongyang’s participation in the Olympic Games can be interpreted as a certified check that it will not launch provocations before and during the Games.

Are you concerned that relations between Washington and Seoul will be damaged by the decision to delay the annual South Korea-U.S. joint military exercises?

Ever since the North’s test launch of the Hwasong-15 ICBM late November last year, American calls for a pre-emptive strike have been growing louder. Though President Moon is a very cautious person, he was the one to suggest delaying the joint exercises to U.S. President Donald Trump. It was a strategic move, and Trump replied positively.

Do you think the joint exercises will be conducted in April as planned following the Paralympic Games in March?

Washington plans its annual military exercise schedule in consideration of all the military activities it’s involved with internationally. Speaking as an expert, not as a member of the government, I would like to suggest a reduction in the size of the exercises instead of a delay. Persuading North Korea and China, and creating opportunities to reopen U.S.-North Korea dialogue and the six-party talks is what South Korea needs to do as the facilitator nation.

What do you think of the criticisms the Moon administration is facing for promising China the three no’s (no additional Thaad deployments, no joining of a broader U.S. missile defense system and no Korea-U.S.-Japan military alliance)?

These three things the South Korean government promised China not to do were all requests from the United States. Even while running for president, Moon warned that Washington and Beijing’s struggle for supremacy over Northeast Asia would bring disaster to South Korea. Today, he has realized it’s important to be able to confidently face China and agree that further Terminal High Altitude Area Defense (Thaad) system deployments are unacceptable. This is a declaration of national sovereignty directed at Washington, and a demonstration that the United States can no longer pressure South Korea using the Thaad issue.

What creative ideas are the government coming up with for dialogue with the North?

Execution is sometimes more important than content. The Moon administration is actively trying to invite high-ranking individuals from major countries to PyeongChang for the Olympics. Trump has agreed to send high-ranking representatives including family members. I guess that his daughter Ivanka Trump will come. If North Korea sends Kim’s younger sister Kim Yo-jong, we may be able to have indirect conversation between the leading members of the U.S. and North Korean governments.

The relationship between North and South Korea is a dynamic one. The Moon administration will have to be careful in how it’s going to shape this relationship if Pyongyang doesn’t make nuclear provocations for a couple of months and also participates in the Winter Olympics. If the North doesn’t aggravate the situation, the sanctions will lose momentum and we may finally see progress in dialogue.

Did South Korea finally get in the driver’s seat?

Do you think there could eventually be a summit meeting between the two Koreas or a dispatch of a special envoy?

There needs to be an inter-Korean summit meeting so that we can gain insight into Kim’s thought process, and inform Kim of the international community’s viewpoint. We need to keep knocking on Pyongyang’s door with the goal of holding a summit meeting at least by the second half of the year.