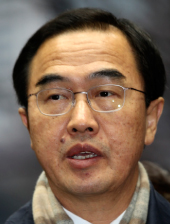 South Korea is considering a temporary suspension of its unilateral sanctions against North Korea during the PyeongChang Winter Olympics after local authorities unearthed a web of restrictions that would prevent a North Korean team from participating in the Games.

A delegation of five high-ranking officials from Seoul, led by Unification Minister Cho Myoung-gyon, is scheduled to meet with counterparts from Pyongyang today at 10 a.m. near the border between the two Koreas to discuss North Korea's Olympics participation. But senior South Korean government officials exclusively told the JoongAng Ilbo on Monday that they were finding it difficult to invite a North Korean team to the country without violating any of its own sanctions imposed on the regime.

For one, if both Koreas do agree on the North’s participation in the Olympics today, the team of athletes and government officials won’t be able to fly to South Korea on the North’s state-run carrier, Air Koryo, because the planes were added to Seoul’s sanctions list on Dec. 2, 2016, in response to nuclear and missile tests that the regime conducted earlier that year.

Choi Moon-soon, governor of Gangwon, the province that will host the Games, raised the possibility of sending a cruise ship to the North next month to ferry athletes, but even that idea would be blocked under current sanctions because any vessel that enters a North Korean port is prohibited from docking in the South within six months.

North Korean officials on the sanctions list include Choe Ryong-hae, vice chairman of the Workers’ Party’s Central Committee, one of North Korean leader Kim Jong-un’s top aides, meaning he wouldn’t be allowed to physically come to the South as well if Pyongyang wanted to add him on the North Korean delegation.

Meanwhile, Baik Tae-hyun, a spokesman for the South’s Unification Ministry, which handles inter-Korean affairs, said during a press briefing Monday that the main agenda for talks would be North Korea’s participation in the Winter Games.

From there on, both sides could talk about matters of “mutual interest related to the improvement of South-North ties,” he said, especially Seoul’s earlier proposal to hold military talks and discuss a reunion of families separated by the 1950-53 Korean War.

North Korea completely ignored the two offers when they were relayed last July. Asked whether South Korea would mention anything about denuclearization, Baik avoided giving a direct answer, saying it “wouldn’t be right to prejudge” ahead of the meeting.

Unification Minister Cho said Monday morning on his way to work at the main government complex in Gwanghwamun, central Seoul, that his ministry was thoroughly preparing for the high-level talks so that the occasion might lead to further discussions between the two countries. “The talks will be held at a crucial time, and the general public and international society are all showing so much interest,” Cho said. Hopefully, he continued, “this won’t be the last.”

If all goes as planned today, it would the first high-level talks between the two Koreas in more than two years and the first since President
Moon Jae-in was inaugurated last May.

The overtures of dialogue have provided fresh fodder for the president’s conservative critics, who sees Moon’s conciliatory gesture as a reminder of past liberal administrations under Kim Dae-jung and Roh Moo-hyun, who favored engagement with the North rather than hawkish policies.

Under both administrations, the South Korean government offered handsome aid packages to the North on the belief that Pyongyang would give up its nuclear arsenal, only to see the regime accelerate its drive.

Last Friday during a meeting with members of the Korean Senior Citizens Association, Moon said he would not “vulnerably just seek dialogue like in the past,” vowing to simultaneously pursue inter-Korean talks and peace “on the base of strong national defense.”

“I will work hard to make the PyeongChang Olympics a peaceful Olympics,” Moon said, “and to mark this year by cultivating a peaceful Korean Peninsula through solving the North Korean nuclear issue.”