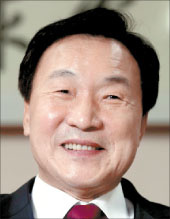 People’s Party adviser Sohn Hak-kyu told the JoongAng Ilbo in an exclusive interview that even if those within the party who oppose the merger with the Bareun Party defect, they will be unable to stop the merger from happening.

“Members from the Honam region [lawmakers from Gwangju and Jeolla provinces] who oppose the merger must realize that the merger will enable the two parties to exert a third power influence in the party politics,” he told the paper on Sunday at the East Asia Future Foundation in western Seoul, where Sohn is a senior adviser. “And when it does, even those who have been opposing the merger will applaud it.

“Even if some members decide to defect, they will not be able to stop the merger,” he said. “But we must try to include everyone in our decisions and make sure that we work together as a party on this. People’s Party leader Ahn Cheol-soo will need to find a point of compromise and agreement with the members from the Honam region.”

Ahn has been striving to bring together the so-called “rational liberals” and “reform-minded conservatives” to counterbalance two major political forces - the ruling Democratic Party and the main opposition Liberty Korea Party, which together hold 237 seats in the 299-member parliament.

On Dec. 20, Ahn proposed an intraparty vote on a merger with the Bareun Party, a move that faced vehement opposition from key members of the center-left People’s Party, particularly from the Honam region. Polls from late December suggested that about three-quarters of People’s Party members supported Ahn’s push for a merger. The Bareun Party leader Yoo Seong-min welcomed the poll results. The party has already agreed to merge with the People’s Party.

But there are those within the People’s Party who are strongly opposed to the merger.

“It’s quite unfortunate that Sohn always seems to choose the wrong side to support in the end,” said People’s Party Rep. Lee Sang-don during a party meeting on Monday. “His statement has no influence on what will happen.”

“There will be no applause from the Honam region [over a merger],” said People’s Party Rep. Cho Bae-sook. “A collusion with the conservatives will not help the party reform nor will it help in boosting its support.”

A lawmaker who asked to remain anonymous told the JoongAng Ilbo, “Ahn intends to meet with Sohn in the near future to discuss the merger possibility.”

In the presidential election last year, Sohn and Ahn contended for the ticket to run as a candidate for the People’s Party. Ahn beat Sohn, who had defected from the Democratic Party earlier last year. Sohn went on to support Ahn’s presidential campaign. He has had amicable relations with a wide range of people, so he has been widely projected to play a mediating role amid party factionalism.

Sohn, a former chairman of the Democratic Party and a former Gyeonggi governor, served as a visiting scholar to Stanford University’s Shorenstein Asia-Pacific Research Center from October to December last year. He returned to Korea on Dec. 21.