Gracenote, an American entertainment and data technology company, has released its predictions for the final medal table at the PyeongChang Winter Olympics, with Korea only expected to manage a sixth-place finish. 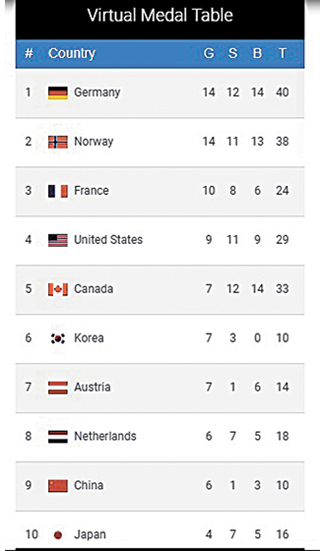 According to Gracenote, Korea will finish with seven gold medals, a new national record. The company predicts that Korea will also win three silver medals, but no bronze.

Providing data for clients such as Apple Music, Eurosport, LG and Tesla, Gracenote also produces predicted results for the Olympics and other international meets, basing its data on athletes’ previous performances including World Cup results.

Korea may also see favorable results in the men’s short-track relay, with Seo Yi-ra expected to take gold in the men’s 1,000-meter and Sin Da-woon projected to come in first in the 1,500-meter.

According to the forecast, Korea will win five out of the eight available golds in short-track speed skating.

The other two gold medals are predicted to come from speed skating mass start. The sport will return to the Olympics this year for the first time since the 1932 Lake Placid Games in upstate New York. Contrary to traditional speed skating trials, in which a pair of skaters race against each other, mass start can have up to 24 skaters starting together to skate 16 laps.

For the men’s mass start, skater Lee Seung-hoon is expected to win gold, while for the women’s race, Kim Bo-reum may take the lead.

The silver medals are predicted to come from speed skater Lee Sang-hwa in the women’s 500-meter, Choi Min-jeong in the women’s short-track 1,500-meter and skeleton slider Yun Sung-bin, who took his fourth World Cup gold medal this season last week.

Though Gracenote’s prediction leaves Korea short of its fourth-place finish target, the expected medal count is still higher than the country’s performance at the 2014 Sochi Winter Olympics, where it left with a total of eight medals - three gold, three silver and two bronze - the lowest since 2002.

There is a chance that the host nation will place higher. For the 2016 Rio Summer Olympics, Gracenote expected Korea to finish in ninth place with ten gold medals - the team actually finished in eighth. Germany is predicted to dominate the Games with 14 gold medals, 12 silver and 14 bronze.