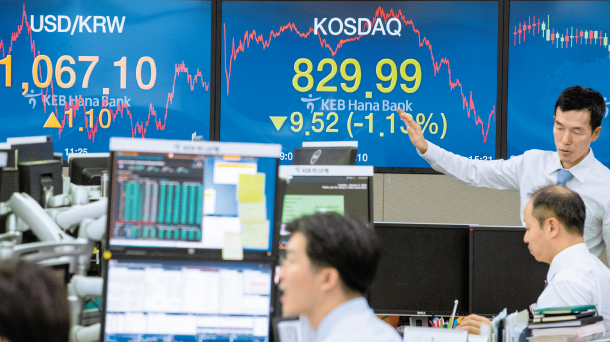 A stock board at the headquarters of KEB Hana Bank in central Seoul shows the Kosdaq market closing at 829.99 on Tuesday, down 1.13 percent from the previous trading day. [YONHAP]

The country’s financial regulator set out to bolster the junior Kosdaq via a state-backed fund and deregulation to bring in more corporate players to the tech- and bio-focused market.

A 300 billion won ($282 million) fund will be created by Korea Exchange, Korea Securities Depository, and other capital market-related government bodies to invest in Kosdaq-listed companies.

Choi also vowed to ease the financial listing requirements of the index to attract more high-tech companies with the potential to grow.

Currently, a unit must maintain positive cash flow from operating activities to be listed on the Kosdaq while not having impaired capital or capital that is worth less than its stated value in the company’s capital stock account.

The chairman said that the two requirements will be removed, adding that the regulator will apply less strict rules in gauging market cap and profit.

“We will make a new listing system so that if a company meets one of three conditions - pre-tax profit, market capitalization and owner’s capital - the company will be listed,” Choi said.

A committee dedicated to the Kosdaq market at the Korea Exchange will be granted more independence and regulatory discretion, according to the Financial Services Commission.

Observers noted that the Kosdaq Committee under the Korea Exchange lacks independence, and as such it lacks a sufficient budget and regulatory support.

Choi said that the head of the committee will be recruited externally.

“Now, Korea Exchange’s director doubles as the head of the Kosdaq Committee, but the position will be separated and an outside expert will head the division,” Choi said.

“The committee will also be entitled to fully review and screen listing processes,” he added.

Potential tax benefits and incentives for institutional investors investing in the Kosdaq were not mentioned on Tuesday, although these details may follow later in the week.

The government wants to bring in institutional investors because the Kosdaq is heavily dependent on retail investors, responsible for 87.4 percent of transactions. Retail investment is typically short-term and vulnerable to market fluctuations. Foreign investors account for 7.2 percent, while institutions, including pension funds, take up 4.4 percent as of October, according to the Korea Exchange.

The regulatory agency mentioned last year that one option could be offering incentives to institutions that expand the proportion of their pension fund that is invested in Kosdaq stocks.