Nexon aims for U.S. with Durango

Nexon aims for U.S. with Durango 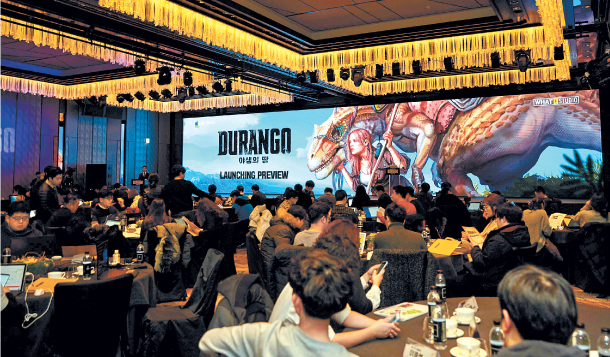 Nexon Korea introduces Durango: Wild Lands, an open-world role-playing game the company has been developing for nearly six years. Durango is set to launch in Korea on Jan. 25. [NEXON KOREA]

Nexon Korea, one of the top domestic game publishers, introduced its latest blockbuster Durango: Wild Lands on Tuesday. The company hopes that the game will help it finally break into the North American market.

“We will officially release the game in Korea on Jan. 25,” said Lee Eun-suk, a producer at Nexon in charge of the Durango project, during a press conference in Gwanghwamun, central Seoul, on Tuesday. “We’ve been working on this project for five and a half years.”

Durango: Wild Lands is an open-world mobile massively multiplayer online role-playing game where players’ goal is to survive in a world populated by prehistoric creatures such as dinosaurs. Players can settle on an unmanned island and build their settlement from scratch by gathering resources and building tools and furniture, as well as houses. Players can eventually gather to form communities.

The company said it will provide a wide range of content that is difficult to find in other games, including sound effects that the developers say are live recordings, not studio-created audio. For instance, to create the sound of wild animals inside the game, producers recorded the sound of animals such as tigers and birds at a local zoo.

The design team also worked with scientists and experts to make the game’s ecosystem as realistic as possible.

Nexon’s ultimate goal is to break onto the global scene and operate the game for over a decade.

“Our goal with Durango is to gain global success, going beyond Asia to reach the audience in western countries [such as the United States and Canada],” said Lee. “From the start, we wanted to offer the game for more than 10 years globally.”

Since Nexon launched the beta test in July, the game has gained more than 2.8 million downloads in some 152 countries. During the global beta test, a total of 220,000 islands were created, which the company said reflects the large number of users.

“North America is a key market for us,” said Noh Jung-hwan, head of Nexon’s mobile business unit. “We had our eyes on the North American market from the start and while the exact launch date is yet to be decided, our employees at Nexon M, a local branch of the company in the United States, are preparing for the launch of Durango in the U.S. market.”