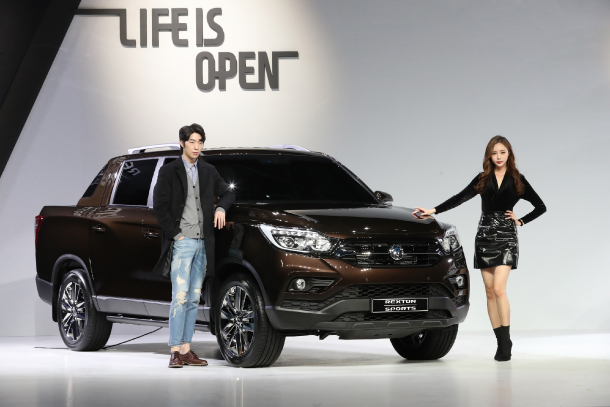 SsangYong Motor launched the Rexton Sports, a pickup truck that it hopes to also market as an SUV, in Korea on Tuesday as it continues to build up its brand as an SUV specialist.

The Korean unit of Indian auto giant Mahindra and Mahindra plans to organize its sport utility lineup under three brands: Rexton, Korando and Tivoli. The new Rexton Sports, previously known by its project name q200, is a midsize vehicle with an open deck in the back resembling a pickup truck.

The model will be registered as a pickup truck, but SsangYong is marketing it as an SUV to target a wider customer base.

While the Rexton Sports inherits many design features from SsangYong’s premium Rexton brand, the new model is more focused on providing a sporty driving experience and more space.

An all-wheel drive mode using SsangYong’s 4Tronic system, which allots 40 percent of driving force to the front wheels and the rest to the back, enables the vehicle to glide through off-road courses regardless of road conditions, the company said.

The open deck in the back can carry up to 1,011 liters (267 gallons) of cargo. By comparison, the seven-seater G4 Rexton is able to carry 40 liters with the seats up and 1,390 liters when the two rows in the back are folded.

SsangYong said it developed the model in response to rising demand for SUVs for leisure activities. The automaker hopes to sell 2,500 Rexton Sports per month and 30,000 per year.

For safety, the automaker said 79.2 percent of the exterior is made of high-tension steel plates. It comes equipped with safety systems like lane change assist and rear traffic alert.

Equipped with six-speed auto transmission, the car’s maximum horsepower is 181. The sticker price starts from 23.2 million won ($21,810). Within the first quarter, the company plans to begin exporting the car to Europe.

SsangYong has shown significant growth in the domestic market with its strong SUV lineup.

“The G4 Rexton and Tivoli played a vital role in fixing SsangYong Motor as an SUV-specializing automaker,” Choi Johng-shik, CEO of SsangYong Motor, said at a launch event for the Rexton Sports in Seoul on Tuesday. “The Rexton Sports will contribute to fortifying such a position as well as normalizing the company business through global sales expansion.”