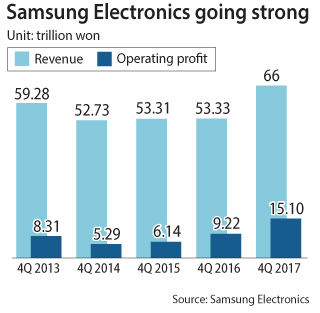 Samsung Electronics projected a record 15.1 trillion won ($14.9 billion) in operating profit for the fourth quarter of 2017 in an earnings guidance released Tuesday, below analyst expectations as a strong won and one-off bonuses dragged down earnings.

And yet, 15.1 trillion won will be a record for quarterly operating profit and represents a whopping 63.8 percent increase from the previous year. According to Samsung’s earnings estimate, the company is likely to post 66 trillion won in revenue for the quarter that ended in December, a 23.7 percent increase year on year.

“The lower-than-expected operating profit is largely attributable to the won’s strength and bonuses paid out at the company’s semiconductor unit,” said Claire Kim, an analyst at Daishin Securities. “We had revised estimates for fourth quarter profits from 16.9 trillion won to 15.9 trillion won and then to 15.3 trillion won, but the won’s rise against the U.S. dollar as well as other major currencies seems to have made a greater-than-expected negative impact.”

Though the bonuses cut into fourth quarter earnings, the semiconductor unit played a pivotal role in boosting the overall performance of the Korean electronics giant. Analysts estimate that over 10 trillion won in profits came from the chip business, roughly two thirds of the quarterly profits.

According to data from chip market tracker Gartner earlier this month, Samsung Electronics topped last year’s semiconductor market with a 14.6 percent market share, even beating Intel, which had a 13.8 percent share.

The question is how long Samsung can maintain record chip sales, especially when China starts massive production of memory chips.

“Memory pricing will weaken in 2018, initially for NAND flash and then DRAM in 2019 as China increases its memory production capacity,” said Andrew Norwood, research vice president at Gartner. “We then expect Samsung to lose a lot of the revenue gains it has made.”

There are also concerns about Samsung’s struggles with other sectors such as mobile devices. With rival Apple releasing two devices - the iPhone 8 and iPhone X - last year, and Samsung’s Galaxy Note8’s lower-than-expected sales in the global market, analysts expect Samsung’s IT and Mobile communications division to see two straight quarters of declining profits.