Korea will not scrap or renegotiate ‘comfort women’ deal of 2015

Korea will not scrap or renegotiate ‘comfort women’ deal of 2015 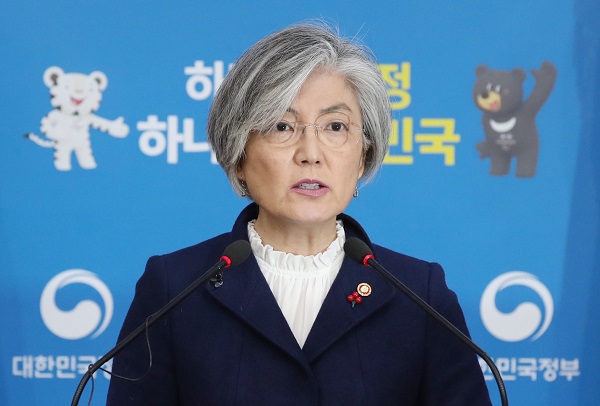 Foreign Minister Kang Kyung-wha announces in a press conference Tuesday that South Korea will not seek a renegotiation of a controversial 2015 deal it reached with Japan to settle the issue of women forced into sexual servitude for Japanese troops before and during World War II. [YONHAP]

Seoul does not plan to scrap or renegotiate the 2015 bilateral deal on the so-called comfort women, announced Korean Foreign Minister Kang Kyung-wha Tuesday, though she underscored that the agreement is not a true resolution to the issue of Japan’s wartime sexual slavery.

The Korean government also plans to raise a fund equivalent to the 1 billion yen ($8.87 million) transferred by Tokyo to a foundation formed under the 2015 agreement for the victims of the Japanese Imperial Army’s forced recruitment of young women into sexual slavery before and during World War II, who are euphemistically referred to as comfort women.

“It is an undeniable fact that that the 2015 deal was an official agreement reached between the two countries, and we will not demand a renegotiation from the Japanese government,” Kang told reporters at the Ministry of Foreign Affairs in Seoul.

The two countries’ foreign ministries struck a deal on Dec. 28, 2015 to resolve the comfort women issue, which included an apology by the Japanese government and a 1 billion yen fund for the victims. The agreement provoked an immediate backlash from some survivors and civic organizations, who claimed Japan should take clearer legal responsibility by paying reparations.

The Korean Foreign Ministry launched a nine-member task force at the end of July comprised of foreign affairs officials and experts in Korea-Japan relations, international law and human rights. The task force was charged with assessing how the deal was reached and to pay more attention to the viewpoints of the victims, who had expressed disappointment at being left out of the negotiation process by the Park Geun-hye administration.

President Moon Jae-in has emphasized that the agreement is not accepted by the general public in Korea and called it “flawed.”

While Seoul does not plan to renegotiate or scrap the deal, Kang encouraged Japan to “accept the truth as it is, according to universally-accepted standards,” to help restore the honor and dignity of the victims and heal the wounds in their hearts.

“What the victims all wish for is a genuine apology [of Japan’s] own accord,” Kang added.

How the 1 billion yen raised by the Korean government to match the Japanese fund will be used is yet to be decided and will include consultations with the survivors and the Japanese government, according to a Korean Foreign Ministry official.