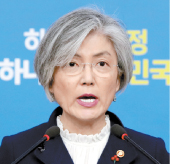 Foreign Minister Kang Kyung-wha announces in a press conference on Tuesday that the South Korean government will abide by a controversial 2015 deal it reached with Japan. [YONHAP]

Seoul will not scrap or renegotiate the 2015 bilateral deal on the so-called comfort women, announced Korean Foreign Minister Kang Kyung-wha Tuesday, though she underscored that the agreement is not a true resolution of the issue of Japan’s wartime sexual slavery.

The Korean government also plans to allocate a fund equivalent to the 1 billion yen ($8.86 million) given by Tokyo to a foundation formed under the 2015 agreement for the victims of the Japanese Imperial Army’s forced recruitment of young women into sexual slavery before and during World War II, who are euphemistically referred to as comfort women.

“It is an undeniable fact that the 2015 deal was an official agreement reached between the two countries, and we will not demand a renegotiation from the Japanese government,” Kang told reporters at the Ministry of Foreign Affairs in Seoul.

The two countries’ foreign ministries struck a deal on Dec. 28, 2015 to resolve the so-called comfort women issue, which included an apology by the Japanese government and a 1 billion yen fund for the victims. The agreement, “final and irreversible” so long as it is faithfully implemented, provoked an immediate backlash from some survivors and civic organizations, who claimed Japan should take clearer legal responsibility by paying reparations.

The Korean Foreign Ministry launched a nine-member task force at the end of July last year that concluded on Dec. 27 that the previous Park Geun-hye administration failed to make adequate efforts to listen to victims before reaching the deal and also made secret concessions, concluding that the accord could not be the ultimate solution to the issue.

President Moon Jae-in has emphasized that the agreement is not accepted by the general public in Korea and called it “deeply flawed.” Moon also on Friday hosted a luncheon at the Blue House for a group of eight survivors and personally apologized to the victims for the “defective” deal.

While Seoul does not plan to renegotiate or scrap the deal, Kang encouraged Japan to “accept the truth as it is, according to universally accepted standards, and continue efforts to help restore the honor and dignity of the victims and heal the wounds in their hearts.”

She elaborated, “What the victims all wish for is a genuine apology [of Japan’s] own accord.”

Kang called the comfort women issue one of “sexual violence against women during wartime and a question of universal human rights,” which goes beyond Korea and Japan in that it “can serve as a lesson in human history and an international milestone in the movement to improve women’s rights.”

The Korean government will strive to resolve the historical issue but at the same time continue cooperation with Tokyo “toward future-oriented relations,” she added, in line with a two-track approach the Moon administration has been taking toward Japan.

Kang has met with 23 of 31 survivors since she became foreign minister, traveling to meet elderly women who live alone in the countryside as well as those affiliated with shelters, and civic organizations for the victims, according to a Foreign Ministry official in Seoul.

The minister was able to hear a “wide range of opinions” from these victims, said the official, including those who insisted upon legal reparations and a full rejection of the fund received from Tokyo. Others said while the amount received was not sufficient, they were weary and would like to put the deal in the past.

Some victims were not in a condition to communicate or were living abroad and could not be reached.

Kang said that the Korean government will put more effort into restoring the honor and dignity of the victims and healing their wounds, and in this process, it will “extensively collect their opinions and take measures that center around the victims.”

The Korean government will appropriate 1 billion yen to match Japan’s donation to the Reconciliation and Healing Foundation, which was launched in 2016, and that Seoul “will consult with the Japanese government on what to do with the fund in the future,” Kang added.

How exactly the 1 billion yen from the Korean government will be used is yet to be decided according to a Korean Foreign Ministry official.

The official said that around 60 percent of the 1 billion yen from Tokyo still remains in the foundation’s account.

The official also brushed off the question of whether the 1 billion yen will be returned to Japan, stating, “I never used the word ‘return.’ The 1 billion will be obtained, and we will discuss what to do with it.”

Japanese Foreign Minister Taro Kono told reporters in Tokyo immediately after Seoul’s announcement that an agreement “is a promise between countries and even if a government changes, must be responsibly implemented under international law and universal principles.”

He underscored that the “implementation of an agreement is a responsibility between two countries in international society.”

The direction of bilateral relations between Korea and Japan could depend on whether Tokyo believes that Seoul has broken the deal or not.

But Kono also said his government plans to “ask the Korean government to properly explain what it means by replenishing the 1 billion yen transferred to the fund.”

Kono said that the agreement had been highly appreciated by the international community and that he expected the Korean government to “thoroughly implement it.”

He also pointed out the agreement was deemed “final and irreversible,” and said that his government is “completely opposed to the Korean government requesting Japan to take another measure,” stating Tokyo had thoroughly implemented the deal.

Earlier that day, Chief Cabinet Secretary Yoshihide Suga said in a briefing, “We have no intention to budge 1 millimeter on the agreement. There is no change in that opinion.”

Some of the survivors of wartime sexual slavery continued to call for the complete scrapping of the 2015 agreement Tuesday after the Foreign Ministry’s announcement of its decision. Another victim, 88-year-old Lee Ok-son, who resides at the House of Sharing, a shelter for survivors in Gyeonggi, said, “I only ask for an apology from Japan before I die, nothing more.”