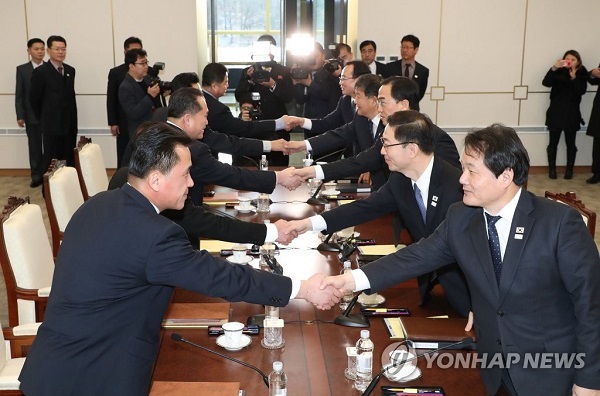 The five-member delegations from North, left, and South Korea shake hands Tuesday morning at Peace House, a South Korea-controlled building near the border separating the two countries, ahead of the first high-level meeting between Seoul and Pyongyang since December 2015. The officials are expected to discuss North Korea's participation in the PyeongChang Winter Olympics, which kick off next month in South Korea's northeast Gangwon province. [YONHAP]

Chun's remarks came in a press briefing after the two Koreas wrapped up the first part of a high-level meeting between the two countries. The meeting itself was the first high-level talks between Seoul and Pyongyang since December 2015, after North Korean leader Kim Jong-un said last week he was willing to send a North Korean delegation to the Winter Games and could “urgently” meet with the South to discuss the issue.

The session began at 10 a.m. and ended at 11:05 a.m. at Peace House, a South Korea-controlled building in the truce village of Panmunjom, which straddles the border.

In response, Chun said South Korea reiterated an earlier proposal from Seoul, which Pyongyang ignored last July, that the two countries hold military talks and discuss a reunion of families separated by the 1950-53 Korean War.

North Korean leader Kim Jong-un did not personally send any comments via the delegation, Chun said.

Whom the regime had in mind when it said it wants to send “high-level government officials” to the South for the Olympics wasn’t mentioned. Aside from that group, North Korean officials said it wanted to include members on the DPRK Olympic Committee in its delegation for the Games.

Both sides will meet again in the afternoon.

North Korea's five-member delegation, led by Ri Son-gwon, chairman of the Committee for the Peaceful Reunification of the Country of the Democratic People's Republic of Korea (DPRK), which handles inter-Korean relations within the North Korean government, includes Jon Jong-su, vice chairman of the committee; Hwang Chung-song a director at the committee; Won Kil-u, vice minister of physical culture and sports; and Ri Kyong-sik, a member of the DPRK Olympic Committee.

"I wouldn't be exaggerating to say North-South relations are [currently] more frozen than the weather," Ri said in opening remarks. "I arrived at this meeting hoping that the North-South governments pull off a successful meeting with sincerity and faithfulness, so that we can gift our whole nation, which is watching this high-level meeting with so much expectation, with the precious outcome."

In response, South Korea's chief delegate, Cho, referred to the proverb, "The start is half," saying, "The meeting has begun after a long rupture of South-North ties, but really, the first step is half the way. In that sense, I hope we start the meeting with willingness and perseverance."

Cho continued, "At the same time, this is contrary [to what I just said], but there's also a saying that goes, 'Can one's hunger be satisfied with the first spoonful of food?’ Taking that into consideration, I hope we don't rush and unknot [our issues] one at a time with perseverance."

At one point, Ri suggested they open their meeting to the press, citing the public's "keen interest" in the inter-Korean talks. Doing so would prove how much the North is making a "serious effort," he said.

But Cho politely refused, suggesting they stick to the customary practice of keeping the high-level meeting private because they had "a lot to talk about" after the long period of no dialogue.

The thawing of tensions between the two Koreas began on Jan. 1 when North Korean leader Kim said in an unusually conciliatory New Year's address he was willing to send a delegation to the PyeongChang Olympics and suggested the North and South "urgently meet." Kim did not specify what the delegation would look like.

It was the first time Pyongyang responded to Seoul's repeated invitations to join the Games, set to kick off on Feb. 9 in South Korea's northeastern counties of Pyeongchang and Jeongseon and city of Gangneung, in Gangwon.

It was also the first time since South Korea's President Moon Jae-in took office last May that North Korea showed any interest in bilateral dialogue.

On Jan. 2, Seoul picked up Kim's cue and suggested they meet today near the heavily fortified border separating the two countries for a high-level meeting. The next day, North Korea's inter-Korean relations chief Ri said in a televised statement that Kim "welcomed" Seoul's positive reaction to his New Year's address and ordered the reopening of the Panmunjom hotline to discuss the Olympics.

The Panmunjom channel had been closed for 23 months after Pyongyang severed all communication between the two Koreas in February 2016 when the administration of South Korean President Park Geun-hye shut down the jointly-run Kaesong Industrial Complex following Pyongyang's fourth nuclear test in January and subsequent long-range rocket launch.

Last Friday, the North accepted South Korea's offer to hold a high-level meeting today at Peace House, 12 hours after Moon talked on the phone with U.S. President Donald Trump and agreed to postpone annual joint military drills. Both countries exchanged their list of interlocutors over the weekend and agreed to start the negotiation at 10 a.m.